Chart of the earthquake in L'Aquila (Italy) and Uranus 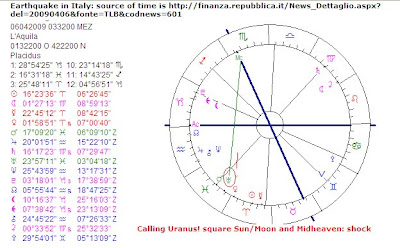 This is the chart of the moment of the Italian earthquake today at 3:32 a.m. Mid European Summer Time. Uranus is the symbol of shocking (...) events. Uranus is important in this chart for 3 reasons:

1. Uranus is the first outer planet rising before the Sun: there is an orientation on an accident or a shocking event
2. Uranus does not make Ptolemaic aspects in sign or orb 5 degrees (in other words: Uranus is 'calling'! and that means that Uranus can be shocking at any possible level)
3. Uranus is exactly square the midpoint Sun/Moon so that there is 'a reigning need' to shock the world

As Uranus is exactly trine Midheaven, there is a way to express the meaning of the combination of these 3 reasons: an orientation on a substantial shock at any possible level. Apparently there was a potential for a shocking event and it was in aspect with the local meridian.

There are two post of other earth quakes on this blog.
1. About the LA earth quake with Uranus trine Midheaven

2. About the earth quake (and flood) in Lisbon in the 18th century (Uranus trine ASC/MC and in a crucial position down under in the chart)

In both charts Uranus is of importance. The trine offers an opportunity to release tension.