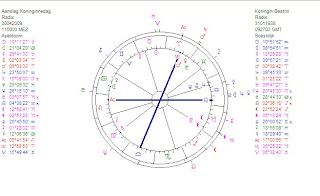 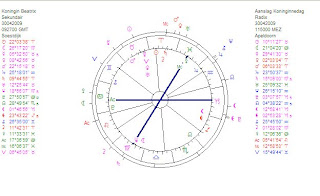 -UPDATE- The right moment of the incident that already caused 4 death. The driver of the car is badly wounded. Rumours say that he was born on March 6, 1971 and that would place transit Saturn opposition his natal Sun today.

The incident on Queens' Day seems more and more to be a terrorist attack. This cost the lives of at least FOUR persons, who were watching the bus with the royal family pass bye in Apeldoorn. It was the dramatic end of all festivities. The shock and the depression is visible in the chart of the Queen.

In the special about Queens'day*) on my Dutch blog Astrokrant**) I wrote:

Transit Saturn square progressed Midheaven, transit Mars square natal Midheaven... That looks like the end of a career. Queensday is always a day of festivities for Queen Beatrix. The transit Sun is always square her Moon, Venus and Jupiter and conjunct Uranus, for a surprise party... But the present aspect with Mars might indicate pain or getting hurt and Saturn at stepping back (or maybe she stumbles and falls, who knows).

Mars and Saturn makes one think of an end, but who would expect the dramatic end of all festivities due to what people think might be an attempt to hit the royal family. It is still 'an incident' and possible 'accident' but the driver seems to have tried to get through the barriers before and he hit two barriers before he hit the people. Two of them died, 23 got injured and 6 of them are seriously hurt.

The 30th of April happens to be the birthday of the Queens' brother in law (Mr. Pieter van Vollenhoven). Here you see the solar return chart for today in Apeldoorn, with Saturn on the Ascendant. Saturn is and stays the planet of ends, depression and being down. 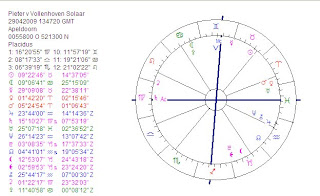 *)Queens'day is the original birthday of the former Queen Juliana, born 100 years ago. It is a day of festivities around the royal family, celebrated all over the Netherlands. The royal family uses to walk through the public and participate in games, shake hands etc. Perhaps this will be the last time that they will do this spontaneously. Times have changed...

**) Astromarkt.blogspot.com is no longer a public blog

Sorry for this incident on Queen Beatrix' Day. A 'bête noir' walking around.

Thank you António. It is a sad event and a fifth person died already. It seems that the driver's life is in danger, too. The driver, a solitary person, had financial trouble after losing his job. He would have to leave his house on Friday (could not afford to pay the rent any more). In my country the sheriff's officers start their letters with 'In name of the Queen'. Perhaps that is why she was the target.