Mars oriental (the outer planet rising before the Sun)

One of the great things that I learned from the book 'Vocations' (by Noel Tyl), is the importance of the oriental planet. The oriental planet is the first (outer) planet rising before the Sun. I think that the oriental position is one of the most prominent postions in the charts*). The oriental position shows us what a person is 'first of all'. When you are 'first of all' a materialist (because of Saturn oriental) and you are an artist, you will probably do the official schooling (preferably the classical school) or try to have another ('decent') education or career first. When Mars is the oriental planet, you will have a drive to act and 'do something about it'. What you 'do' is depending on the aspects with Mars, the conditions, culture and situation, your genes and your gender. 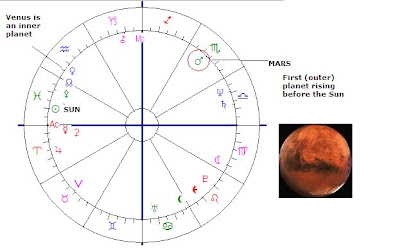 MARS is the symbol of the soldier, the drive, the figth, scars, injuries, wounds, hurt, cuts, work, activism, action, fire, guns, knifes, iron, techniques, tools, producing (products or children), methods, instruments (like guitars) and machinery and...of males and muscles. That is just an idea of the Mars-orientation. There are many ways to show the effect of an oriental Mars. Here is a list of persons, events and organisations with an oriental Mars.

War criminals in Ruanda, Cambodja...
Another war criminal is Dinko Sakic (WWII)
John Lennon, who was shut...
Two of the four terrorist of the London subway blast had Mars oriental (one conjunct, one square Uranus)
Manuel Marulando (FARC) has an oriental Mars conjunct Uranus
Paul Bernardo (Ken and Barbie-murders) has Mars oriental, trine Neptune.
Convict Gotthard Lerch has an oriental Mars (and as Hin Jintao of China was born on the same day, he also has it)
Kenneth Morris (recently executed) had Mars oriental (square Pluto)

The positive side of Mars rising before the Sun shows up when the energy is being used in sports, positive action or music:
Edmund Hillary or
Giovanni van Bronckhorst
Albert Schweitzer, who learned how to control his moods (as he had Moon quintile Saturn:)
Jimi Hendrix had an oriental Mars without major aspects (semi square Neptune). He hit the guitar and he used drugs. He was very productive, too.

ORGANISATIONS
In the charts of organisations, Mars shows what is the first objective. See the chart of NATO, with Mars oriental. It is a military organisation and Mars is the symbol of the military.

EVENTS
I found oriental Mars in the chars of events, too:
- Shooting in Germany
- Dunblane Massacre

PS It might just be coincidence that there are a lot of examples of Mars oriental who died (rather) young. (I also think of George Harrison who had Mars oriental in his chart, playing the guitar, too, btw).

*)Of course, the angular and crucial placements and the 'calling' (not aspected) planet is very important as well. And so are the positions in hard aspect with Sun/Moon and ASC/MC.

PPS Explanation: inner planets (planets between Earth and Sun) are Venus and Mercury. The other planets are outer planets.