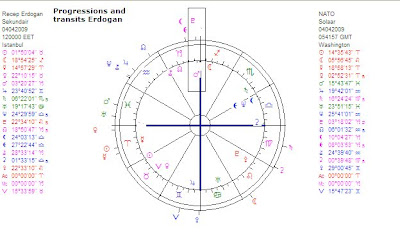 Recep Erdogan, the Turkish PM was not happy with the results of local elections. But he has his revanche. He managed to block the appointment of Danish PM Rasmussen, who was supposed to be the next Nato secretary-general. At least, the other 27 members agreed. Erdogan can win the votes of non-secular forces in Turkey with this blockade. Perhaps that is why transit Pluto is conjunct his progressed Mars. The combination of Mars and Pluto is the combination of using influence and of political struggle. But there is also, as always, a more personal interaspect. Saturn of Erdogan is conjunct the Ascendant of Rasmussen. And that is the symbol of a blockade against a person, of holding things against him and of putting the blame on him. Here are the chart of Rasmussen and the positions of Erdogan on the outside. 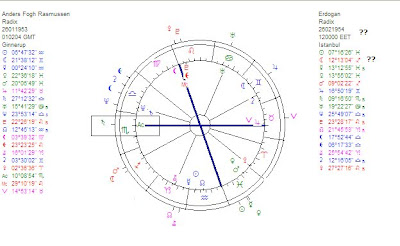 Interesting is that the present opposition of Mars and Saturn on the meridian of the chart of Turkey. Usually Mars-Saturn is not a beneficial combination of aspects. Perhaps the action of mr. Erdogan is not in favour of the country in the long end? As Saturn is on the IC, this means that there is a bad situation on the background and Mars on top might be an attack on the stability of the country. If Mars-Saturn is on the meridian of an individual, it might be blocking his or hers vital energy. I recently read a post on Elnu.com about the Mars-Saturn opposition of this weekend that you may find here... 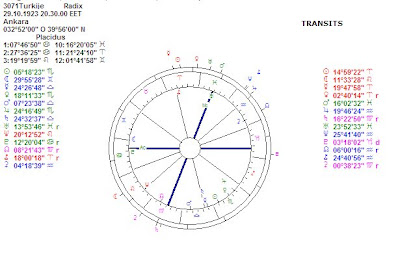 On the 12th of April 2009 transit Uranus will be trine Turkey's Jupiter and that might bring positive change. Also, the Jupiter-Neptune opposition will be out of orb by then and questions of religion (JupiterNeptune) may have been solved. That does not change a thing about the position of Saturn down under in the chart of Turkey. It will take until October 2010 until Saturn starts climbing again.

Meanwhile, president Obama has said that there is no hurry in appointing Rasmussen.

More about the charts of Erdogan and Gül...
For more about Mars and Pluto in aspect or midpoint combinations, read Astromarkt...