BIRTH CHART of RICHARD GERE
The man who kissed himself out of India... 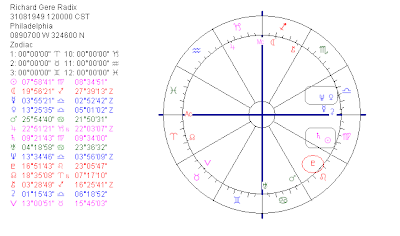 Richard Gere is free to go to India and will not be arrested for kissing Shilpa Shetty (with passion!). Gere is often in India to support refugies from Tibet, a.o. I am afraid he has a time unknow chart:(

VENUS CONJUNCT NEPTUNE
He was born August 31, 1949 in Philadelphia with a very tight aspect that indicates love and romance: Venus conjunct Neptune. It is the aspect of the persuader, the artist and the womaniser. Yes he is:)

In his chart Pluto rises before the Sun. That means that he is orientated on/focussed on issues regarding money, sex, danger, influence, power or politics. The Moon in Sagittarius is related to the desire to travel abroad, so I guess he will be happy about this decission of the Indian authorities.

JUPITER INSTEAD OF SATURN NOW
Transits of Mars, Jupiter and Uranus are making hard aspects with his prominent progressed Pluto right now and transit Pluto is trine progressed Mars (for winning a battle). I hope he does not kiss Shilpa Shetty again:). But if he cannot resist her charms, it will be not as bad as before with Transit SATURN conjunct his progressed Pluto. In his birth chart the conjunction of Sun and Saturn points at the possibility of a highlighted error, some day, some place. And this was in India.

The almost fatale and extra ordinary kiss made me write about Richard and Shilpa before. This is what I wrote on my former blog (09/28/2007 02:17)
"Shilpa Shetty's almost missed her flight yesterday due to Richard Gere's kiss months ago! Read all about in the The Telegraph (Calcutta, India)

This delay shows in the positions of the planets today. Saturn (for delay) is involved (semi square Saturn, perfecting, and sesqui square Jupiter). And so is Uranus (for upheavel: square to her Sun and sesqui square to Venus). But with Jupiter trine Mars and semi square Uranus to assist her, she could fly anyway after all."

On the 26th April 2007 I wrote about her, too:
"In the article about people meeting you can read that sometimes lifes get related due to a progression. Here below you see the progressed positions of Richard Gere (inner circle) and Shilpa Shetty (outer circle). Notice that her progressed Venus is exactly conjunct his progressed Mars!And what happened: they kissed in public (it looked like an embrace dancing the tango, just too much). For some reason that caused a big scandall in India and even provoked death wishes. Transit Neptune is inconjunct Shilpa's progressed Saturn and Transit Saturn is conjunct Richards' progressed Pluto: should this mean she is sad that he is in danger now?

BIG BROTHER
Before Shilpa Shetty was in the Astromarkt news, too!
"Bollywood star Shilpa Shetty is in the British Big Brother house in between two fires. Two of the other inhabitants keep making racist remarks. She responds with emotion and that is to be expected with the Moon oriental (most possibly in Taurus). She was born 8 June 1975 in an area where Tulu is spoken, in India. She has Sun semi square Venus and Jupiter square Saturn as the most narrow aspects in her chart. That is indicative for estetic values and...for the disadvantages of advantages. For her succesful efforts we find Mars square Jupiter/Pluto (and Saturn/Pluto). Jupiter is sesquisquare Venus/Pluto and Nodes is sesqui square Mars/Jupiter. With Mars in an obsessive quindecile with Uranus impulsive and explosive situations are to be expected in her life" 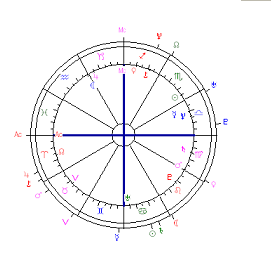 ASTROLOGY OF MEETING and GETTING TO KNOW EACH OTHER
About the starting point for relationships in the - progressed - chart
People meet or get to know each other at the moment that they share the same kind of situation or period in their life. Both partners are at the same time searching for hapiness or are sharing a good or bad moment and that 'connects' them. At least, you would think so when you see their progressed charts!

Sometimes they meet too soon. Sometimes that meeting is wrong for both of them....
More about this...