OSAMA ANGRY AT THE POPE
What does the chart of Benedict 16th tell us? 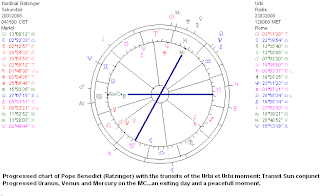 An angry Osama bin Laden has threatened Pope Benedict by linking him to the republication of the 'Danish cartoons'. How dangerous can it be, next Sunday? Here you see two images of charts and transits. Uranus is important right now. Also, he will have to wait until December for a safer moment. Right now, transit Pluto opposition Mars on the IC points at the importance of security services.

Read about popes and their charts in the article under this link and here is more about the chart of Benedict the 16th:

READING THE POPE's CHART
The natal chart of the present Pope has a crucial and calling Jupiter and Saturn, the combination for hierarchy and a vocation for clergy. Saturn is on top, so that he is above all a conservative in his conviction (Sagittarius) but open and tolerant in his aproach. Jupiter in Pisces calling can also be read as a call for expressing devotion at any possible level. Sun trine Neptune is an excellent combination for a spiritual leader. When he became pope, transit Pluto on his MC told him that he had to do it. 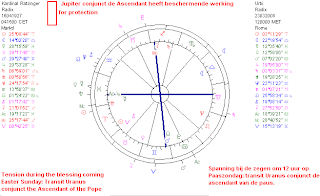 Apart from the prominent Jupiter in Pisces he has another religious combination: Mars 22.5 Jupiter/Neptune. Another tight aspect is that of the diplomatic and polite Moon in Libra, square Pluto! I think he can be very rigid in following certain habits and rules that he is used to. There is Mercury square Mars for discussions and Venus square Neptune for sometimes making the wrong choices...But who is perfect?