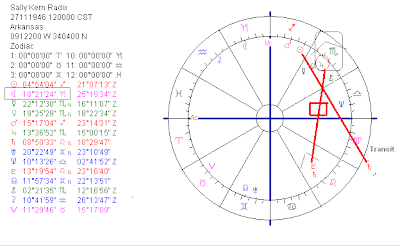 With Transit Saturn square her Sun Sally Kern, an Oklahoma state legislator, said that homosexuals were worse than terrorists. And now it seems that she is the mother of a homosexual son, Jesse, who is behaving badly. Her husband strongly denies this. He says homosexuals should not have sex. He is a baptist preacher.

The Moon in Capricorn in her chart and in certain conditions (like a community of narrow minded people) can manifest herself as a so called decent person, in order to be neat and acceptable in the community. So the revelations about her son Jesse won't be very welcome, I guess. Sally Kern is not ready for a 'coming out'. And now that Saturn highlights her mistakes and failures, she might soon wish that she never said what she said. Up to now she says she did not say anything that was not true...
Geplaatst door Astromarkt op 8:58 PM