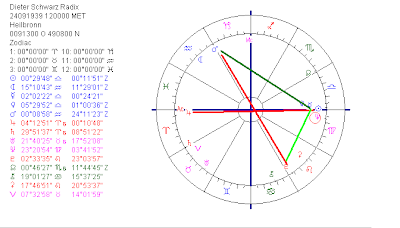 Transit Pluto square Sun and Mercury points at problems and challenges for Dieter Schwarz, owner of the food concern Lidl, now that has been made public that Lidl is spying it's personel, does not like unions and even puts the clients on tape!.

Dieter Schwarz is born 24 September 1939 in Heilbronn with Sun tightly trine Mars, the perfect combition for the entrepeneur. This Sun is opposition Jupiter and sextile Pluto. The combination of Sun, Jupiter and Pluto adds self confidence.

But watch the calling Saturn! Saturn does not make major aspects in sign and is prominent in this chart. Saturn is the planet of the manager, hierarchy and conservatism. Business men profit from a prominent Saturn, symbol of material things and securities. Yet, Dieter Schwarz has Neptune oriental and ideals. He has a creative way of combining ideals with busiiness through a biquintile.

Transit Pluto is now also conjunct progressed Venus. Venus-Pluto is the financial axis. The aspect points at the price you pay for the choice you made. And as it happens, Venus-Pluto is also the symbolic combination of estetic values...The positions on his birthday show that there might be use or abuse of power, money and influence. (Mars opposition Pluto). He cannot be denied a passion for making money with Venus trine Mars and sextile Pluto. Good taste (Venus) might conquer and cry victory, however (Pluto), if the customers want so.