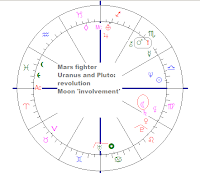 Yesterday the Colombian army shot Raúl Reyes, second man of the FARC (the revolutionary movement that holds a.o. Ingrid Bétancourt in chains in the jungle). It was with transit Neptune sesqui square Sun and Uranus trine Mars, so I bet it was quick. Not long ago transit Saturn was conjunct his progressed Sun. Maybe he was getting too old to be in the jungle and be alert all the time. Transit Pluto was conjunct progressed Mars and transit Mars was conjunct progressed Uranus. In his natal chart there is such a combination of Mars, Uranus and Pluto. In the 22.5 range Mercury and Venus connect Mars/Saturn, Saturn/Uranus and Saturn/Pluto. Mars is 90 degrees away from the midpoint Sun/Uranus and 67.5 degrees from Sun/Pluto. Uranus is connected to Sun/Mars. And in his solar return chart Mars was square Zero Aries, conjunct natal Uranus and semi square natal Pluto. Mars-Uranus-Pluto is the combination of a sudden violence and attack and of the revolutionary fighter. Now that those particular marks of this individual were highlighted, he was taken by surprise.

He was born 30 September 1948 with the Moon rising before the Sun. That is an indication for being and feeling 'involved' and for a focus on his own kind of people. The Sun does not make major aspects and that is the sign for the leader (Sun = leadership, unaspected = 'calling'). Uranus square Zero Aries marks him as a man who wants to change the world. As Pluto is sesqui square Zero Aries, there is a combination for revolutionary changes (Uranus and Pluto combined). And look at Mars square Pluto for the use and abuse of violence or for having to defend oneself against violent acts. The prominent placements reveal his Astro identitiy: that of a biased leader who wants to make immediate changes.

There is a trine between his Venus and Jupiter. That is rather interesting. Would we expect parties in the life of a revolutionary man living in the jungle and keeping prisoners? But we know little about his life with female combattans, do we? Anyway, he was a Marxist by conviction, says Wikipedia. WIthout an hour of birth this cannot be verified by the positons of that day. However, we see Sun conjunct Neptune and in a 75degree quindecile with Jupiter for the Jupiter/Neptune combination of followers and believers (or idols and religious persons).