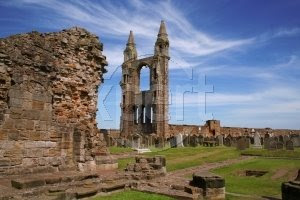 The Pope said that he is considering the rehabilitation of Martin Luther. And that seems to be good news, looking at the natal chart of Martin Luther. The MC (Midheaven) is the spot in the birth chart that gives information about the state of a persons' reputation. Today, with the message of the Pope in the newspapers, transit Pluto is sesqui square Martin Luthers' MC with an orb of zero! Mars is semi square the Midheaven (orb 7 minutes) and Jupiter is trine the MC (orb 40 minutes). The combination of Mars, Jupiter and Pluto indicates successes. So even now that birth positions and in particular the position of the Midheaven remains in function.

Martin Luther was born 10 November 1483 at 23 hours in Eisleben (Germany). Saturn is oriental in his chart and conjunct the IC. There are no placements in earth signs. The material orientation is obvious. But...the tightest aspect in his chart is Mercury in Sagittarius conjunct Neptune. Notice the Jupiter-Neptune connection that is so frequent in the charts of religious people. This connection is confirmed by the midpoint combination of Mercury 22.5 degrees from Jupiter/Neptune, Venus conjunct Sun/Jupiter and 22.5 degrees from Sun/Neptune, Neptune 22.5 degrees from Mercury/Jupiter, Northern Node 157.5 degrees from Jupiter/Neptune and the combination of the Ascendant connected to both Jupiter/MC (22.5d) and Neptune/MC (180d). 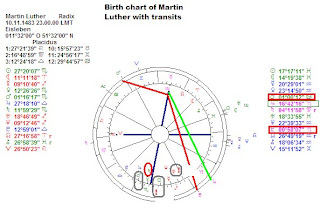 Also notice the 'calling' Sun (not making major aspects in sign). Leadership and drawing attention are part of the importance (prominence) of this Sun. Uranus does not make major aspects, too. Uranus is the planet of revolution, change and rebellion. What Luther did, was controversial in his time. His ideas about the Jewish religion is controversial even today!
Look at the calling Mars, ruler of the Moon in Aries. This Mars does not make aspects in sign (but is within orb for a conjunction with Jupiter). I consider this Mars calling and fitting with what he did. He was an activist (Mars prominent) and a rebel (Uranus prominent).
With his MC-vocational routing ending in the mutual reception of Venus and Pluto, with Pluto in the second house and semi sextile Pluto, we can easily see why he was that angry about the money the people payed for their sins, ijn order to get to heaven (indulgences). Venus-Pluto is the financial axis.

An important thing in his chart is the Yod that the prominent MC (semi square Aries Point) makes with Uranus and Pluto. The Uranus-Pluto combination is reflected also in the midpoint combination MC opposition Uranus-Pluto.
In my article in Dutch about the combination of Uranus and Pluto I mention that in 1966 there was a conjunction of those planets. This conjunction was square the natal Sun of Mao Zedong and caused the 'cultural revolution' in China in that year. In natal charts the combination of Uranus and Pluto reflects a certain radicalism or extremism in the charts of politicians. As an historical example: Jan Palach had Uranus semi square Pluto, both connected to Aries Point (so, prominent) and he burnt himself for political reasons. The combination for the impulse to change the world is also visible in the charts of George W. Bush (Sun = Uranus/Pluto) and John F. Kennedy (Sun square Uranus/Pluto). It might indicate the urge to take drastical measures, too, and the fact that their own lives changed in a very strong way because of their political status. Anyway, Martin Luther had this combination strongly highlighed by the Yod and because Uranus is calling in his chart. Fanatism is also indicated (Sun semi square Pluto). Martin Luther gave his name to the rebellious protestant church, he was a reformer, in spite of Saturn rising before his sun. Or maybe more: because of Saturn rising before the Sun, as he wanted the church to spend less and to be more sober. 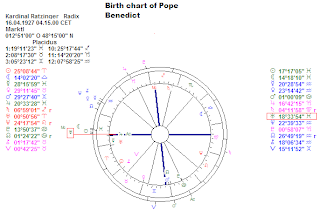 When Martin Luther was excommunicated (January 3, 1521) he had the progressed MC opposition progressed Uranus. I think it is interesting to notice that the present Pope's Ascendant is tightly square Luther's Uranus and that Luther's Mars is inconjunct the Pope's Uranus. Also his Mars is almost right on top of the Chiron of the Pope.. Uranus is still at work. In fact, the progressed Uranus of Martin Luther recently 'crossed over' the Midheaven of the Pope. Uranus is about to conjunct the Ascendant of the Pope, too. Maybe he is right and it is time for unification again. After all, Uranus is the planet of controversies, but also the planet of brotherhood and being united.

For those astrologers interested in religion:
Comparing popes
Study about Trappist martyrs