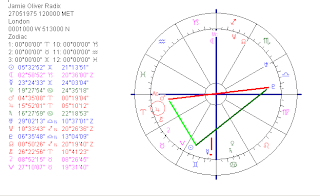 With Transit Mars square Pluto an independant investigation (Pluto!) resulted in qualifying Jamie Oliver's school for cooking as ... a mash. It won't make Jamie happy. Maybe he is a bit angry even...This transit hits the opposition of Mars and Pluto in the birth chart!

Jamie was born 27th May 1975 in Essex, UK with Jupiter rising before the Sun, Mercury 'calling', and without placements in the fixed signs. On the other hand, he has a lot of placements in cardinal signs. Mars is opposition Pluto and the Sun makes harmonious aspects with both Mars and Pluto. The Sun also makes a creative biquintile with Uranus. (BTW It is interesting to see that some of these aspects correlate with those of a controversial but popular comedian in Holland, Paul de Leeuw.)

You see the succes, the prominence of communicating and writing (Mercury). Sun, Mars, Mercury, Jupiter and Pluto strongly present themselves! The combinations of these planets are the ingredients for a good carreer. It is amazing how quickly Jamie Oliver became one of the most succesful cooks in the world! The optimistic orientation (Jupiter), the strong energy and will (Sun-Mars-Pluto) and that combined with initiative (60% in cardinal signs) brought him succes so that he could do what he wanted most: be a writer, tell his story.

It would be nice to have his HOB. But even without that, it is easy to find the Sun-Mars-Pluto composition, Uranus-Pluto 22.5 degrees...for an impulsive and sometimes explosive nature. He does not cook by the rules, he invents them at the very moment of cooking and does a lot with his fingers.

TRANSIT SATURN
These days Saturn is crossing back and forward over his natal Sun. Time to start limiting himself. Maybe educating cooks is just too much?