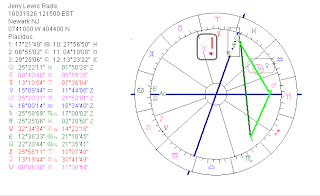 Comedian in the movies, director and producer Jerry Lewis is celebrating his 82nd birthday today. He was born 16th March 1926 in Newark, New Jersey at 12h15 (P.M.) EST. His Sun conjunct Uranus are conjunct the MC. Jupiter is rising before the Sun and ruler 1 Moon is calling in Taurus in the 10th house. Jupiter is semi square Zero Aries and conjunct Venus. His chart contains a lot of prominent placements and Jupiter is most prominent of them all. Neptune, for medications, media and movies, is end dispositor of the Midheaven in Pisces.

MOON
Jerry Lewis was born in an artistic family. His father was a comedian, too. Knowing his family and without knowing more than this unaspected Moon in 10 in Taurus you could already guess the influence of his ancestors on his carreer.

FYSICS
The most narrow aspects in his birth chart are involved in a so cold 'small trine' between Sun-Uranus, Marss and Saturn. Narrow small trines produce a range of midpoint combinations. When the planets involved are 'difficult' (like in this case) this has the effect of 'the other side of the coin'. Jerry Lewis suffers from a life long pain in the back (since 1965) and carries an electrical implant in his back to control this pain.

Two times Jerry Lewis could have died. End of 1982 he was pronounced clinically death (Progressed Moon opposition Saturn and semi square Pluto; transit Saturn AND transit Pluto inconjunct the Midheaven; Neptune square Sun and transit Mars semi square Saturn. People died with less of these sort of aspects...but Jerry Lewis had a fortunate trine of Venus with Sun and MC.

In 2006 he wrote 'Dean and me, a love story'. His movie partner Dean Martin was born 7 June 1917. His Venus and Jupiter trine (tightly!( the Sun of Jerry Lewis. Jerry's Jupiter is tightly sextile Sun and tightly trine Dean's Mars. There is also a trine between their Mars. Good partnership indeed!
Geplaatst door Astromarkt op 6:44 PM