GUUS HIDDINK TO STAY IN RUSSIA
Birth chart of a Dutch football hero... 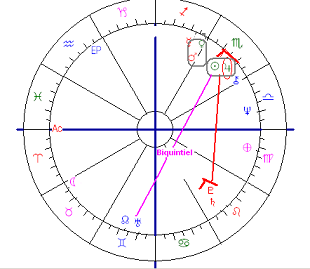 On the 22nd of November 2007 I reported that Guus Hiddink managed to bring Russia to the European Championship (Football)and that he had that day:
Transit Sun conjunct Venus, Venus semi square Venus, Jupiter semi square Jupiter and Uranus trine Sun.

Today he continued his contract. He will stay in Russia till the championships in South Africa in 2010. I am not surprised that Russia wants to keep him. Guus Hiddink (born November 8, 1946 in Wisch, The Netherlands) seems to be able to make any team a winner, for exampel South Korea and Australia. Russia even beated England! How does he do it?

Hiddink has the qualifications of a true leader, a positive attitude and he is ehm...unique! But he is also full of passion. Notice the prominent Sun sesqui square Zero Aries for leadership! Just like other coaches he is dominating (Sun square Pluto). Jupiter rising before the Sun makes him a true international and optimist. Uranus is biquintile the Sun and does not make major aspects in sign. That makes him rebellious and creative in finding alternative solutions that improve the (football) world. The tightest aspect in his chart is Venus conjunct Mars. So that even without knowing his HOB it is easy to see: he has a passion for what he is doing and that is what makes him a great coach.