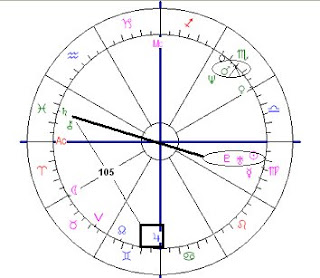 DMITRI MEDVEDEV
Today Medvedev has been elected to be the next Russian president. This happened to him with transit Mars conjunct his Jupiter, Jupiter trine his Uranus and Pluto; and with Jupiter sextile his Mars. These are FOUR combinations for succes in one day.

The natal positions of Medvedev are very clear about him. You see an oriental Pluto (for a politician and strategic person). This Pluto is conjunct Uranus (for making the world a better place). Pluto and Uranus combined point at a radical person, a revolutionary mind. Jupiter square Zero Aries for succes and Mars sesqui square Aries Point for the drive. Now we have Mars, Jupiter and Pluto prominent for the combination for succes.
Nevertheless, Wikipedia says he is known for being moderate, liberal and practical. Hmm...this might end up in surprises for me or for Wikipedia:). His chart shows a hyperactive strategic open minded powerfull person. I am afraid that the wide square between Sun and Saturn does not offer much hope for democracy. Mostly politicians with Sun aflicted by Saturn want to do 'it' on their own (like Chávez, Stalin etc.).