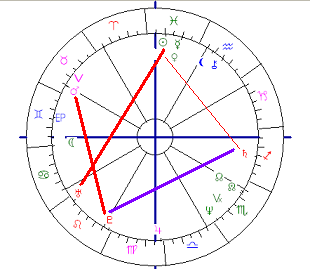 On the 10th March it is Osama bin Laden's 51st birthday. His solar return (birthday chart) has Sun conjunct Uranus and in a 165degreee quindecile with Saturn. It seems that the theme of limited freedom (stron in his birth chart) comes back even stronger in 2008. Let us have a look at the reading I did on Astromarkt.

BIRTH CHART OF OSAMA BIN LADEN
OBSERVATIONS
- The Sun square Saturn and Mars square Pluto and Saturn quindecile Pluto: that is a combination for using hard violence.
- I see fifty percent in watersigns: to be influenced and involved too much, a desire to belong to a group of persons, involvement.
- Sun square Sarturn and sesquisquare Uranus: limited freedom.
- No placements in airsigns and an afflicted Mercury: not always reasonable, sometimes you cannot reason with this man.
- Mercury square Saturn in Sagittarius: not always telling the truth about being strickt in applying the religious rules.

These are observations of the positions for the day that Osama Bin Laden is supposed to be born. That was on March 10 1957 in Jeddah (time unknown) according to the CIA. On that day there are combinations for success, but there are also indicatons for limitations of freedom and for hard confrontations. Yet, the narrowest aspect is Mercury conjunct Venus: he is a communication talent.

Add this with being rich and with his fundamental religious education when he was a lonely teenager; mix this with the time and culture of his whereabout'; see this in comparisson with the charts of terrorist....and there is Osama. Here you see the positions on his birth day.

Osama has an afflicted Sun in Pisces, square Saturn and sesqui square Uranus (a combination for limitation of freedom). The affliction between Sun and Saturn in Osama's chart reminds me of that in the chart of Hugo Chavez and Stalin. The most narrow aspect on the day he was born is the conjunction of Mercury and Venus: he does have a talent for speaking and writing, he is polite and a diplomate. There is also an apparent combination for ambition and getting where you want to be: Mars trine Jupiter and square to Pluto makes such a combo. It is Saturns' quindecile with Pluto that makes his obsession for using force and forcing things a disadvantage to himself.

Saturn is the most important planet in the chart. Saturn rises before the Sun (is oriental). That is for begin serious and ambitious and in Sagittarius that will be with a background ot theology and conviction. Saturn does not make but difficult square aspects and is afflicted. Saturn is in Sagittarius, the sign of the conviction and religion and the sign of foreign countries.

MARS-SATURN-PLUTO
The square Mars-Pluto is the first clue to the use of violence. Mars is conjunct the fixed star Algol (for adventures, lying and for the one who litterally or not loses his head). Pluto is conjunct Regulus (the 'royal star'). But that is the fact with many of those of his generation.

CANNOT BE REASONED WITH...
You cannot reason with Osama bin Laden. There are no positions in the signs for communications (the airsigns) and Mercury is weak in Pisces and blocked by Saturn. Still, he is mostly active with words (he has others to act for him). He may speak easily (with Venus) but there is a certain obsession.
1. Mercury is making an obsessive quindecile aspect of 75 degrees with Mars
2. Venus is also 75 degrees from Mars: sexual obsessions about male-female relationships (see the 'trivia')
3. Finally a quindecile of Saturn in Sagittarius (the sign of convictions) with Pluto. Such an aspect is telling for the 'die hard': the man who is obsessed about hard confrontations.

VIOLENCE AND TERROR
The last mentioned quindecile creates a relationship between Mars, Saturn and Pluto. That relationship shapes the conditions for unnatural death (of yourself of others) as a major theme in life.

Bin Laden's chart corresponds with the charts of terrorist. Like them he has connections betweenMars and Uranus : Aries Point squares Mars/Uranus and is sesqui square Uranus/Pluto. Mars is conjunct Sun/Uranus. There are little marks for a religious person. Jupiter is weak in Virgo and there are no compensations like connections with or from Jupiter and Neptune. Strong and hard ambition seems to be in the first place (re: Saturn oriental and in an obsessed aspect with Pluto). But if the Moon is in Cancer there is an indication for a religious education or 'upbringing'. The moon connects both Jupiter and Neptune.

BIAS
Bin Laden is strongly involved with groups and of course there is a strong bias. For this we find the Moon in Cancer, added with the positions of 5 out of the 10 planets in the watersigns. Therefore I think he was born after noon.

TIME OF BIRTH?
It is unknown how late Bin Laden was born. But...speculating...if he was born at 21:01:38 hours, on September 11th 2001 (the day the Twin Towers came down) he has Sun Arc MC semi square Jupiter. And as a good explanation for his long and small posture there would be Saturn conjunct the Ascendant and in the 12th. Jupiter, ruler 1, would be on the MC. For his leadership the Sun would be on the crucial lowest spot of the drawing, square the Ascendant. Pluto would be in the 9th (for hate against foreigners and fanatic convictions). And the MC would be conjunct Neptune/Pluto, square Mars/Uranus and semi square Mars/Neptune. Transti Saturn would square the Progressed MC in 1991, the year when he was forced to leave his home land after a conflict with the royal family. But it remains speculations...

HISTORY OF TERRORISM
In 1996 he announced a fatwah (a call for a kill) with progressed Sun trine Pluto and sesqui square Saturn (for the hard confrontation). The results of the attack of 2001 seems to be surprising to him (Progressed Sun square Uranus and biquintile Jupiter). On September 11th he had a solar transit of Sun semi square Uranus (for a day with tension).

BACKGROUNDS
Wikipedia tells an interesting story about his background. His father should have married 22 times at least (but never with more than 4 at the time). Osama started living with his stephfather after his natural father divorced his mother. !!Look at the Sun square Saturn!!! That is an aspect that often indicates breaking up the relationship with the father (due to divorce, death or separation). And it is an aspect that is common among criminals (especially in the USA). Maybe because in many cultures not having a father in the house is a disadvantage (f.ex. because of it makes you poor). Apparently even in Saudi Arabia it is not an advantage to miss the love and attention of one of the parents.

WILL HE BE CAUGHT?
Will Osama be caught soon (if he is still alive)? Within half a year from now transit Pluto will square Jupiter and soon Jupiter will square his natal Sun. That does not refer to an arrest. And only if his MC and Ascendant declare otherwise, I asume that the chance is very small...

TRIVIA
In August 2006 an 'ex-sexslave' of Osama told the media that he was obsessed by Whitney Houston and even planned murdering her husband. It is astrologically a case of counterparts. Whitney Houston is a Leo and Osama a Pisces (difficult combinations basically). The Moon of Whitney is in Aries and his in Cancer (difficult to live together or to get used to the different habits.) His Mercury is opposed to hers (problems communicating). Her Venus is in a very narrow inconjunction to his Venus (they cannot match preferences). Her Mars is sesqui square his (good for a fight or not longlasting sexual attraction). Her Pluto opposes his Venus and Mercury (that makes the attraction very intense). Check it yourself: Whitney Houston is born 9th August 1963.
Geplaatst door Astromarkt op 7:14 PM