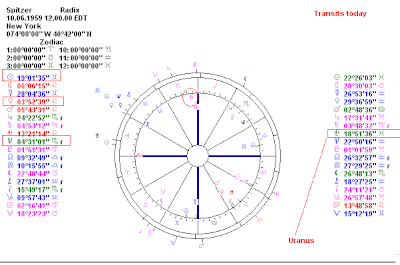 Eliot Spitzer is governor of New York at the moment, still...He is a true moralist and now he admitted to wrongdoing after that he was linked to a prostitution ring by the New York Times. Those who read my blog and site more often, have seen examples of the way Uranus works before. And here is another one.

upheavel (Uranus) about a love affair (Venus Neptune) that changes
the way he lives or is seen (Sun).

It is obvious that this transit would be important, as in his birth chart there is a hard aspect between Sun, Venus and Neptune! It is a pitty for his carreer. He has a calling Sun (for leadership) and a strong Saturn in Capricorn oriental (for being ambitious, a manager). WITH hour of birth we would understand more about his chart. But still, without it it is easy to observe that he would come in the news (Uranus) with a 'romance' (Venus and Neptune). Venus is inconjunct Saturn and square Neptune in his birth chart. It might be that the Moon is also square Neptune. Here you have 3 indications for conflicts in relationships and 3 is a crowd!:)

This affair reminded of the predictions of 2008 for Gemini, that you can find here.... I advised those born under Gemini to be discrete, sincere and thrutful, especially in 2008! And see what happens if one does not (LOL!:)

GEMINI: truth wins...
2008 will not be the easiest year for Gemini’s. There might be disappointments during travels or moves. One advice is to stay truthful and sincere always, whatever happens. And to be discrete. If not, it might cost you a lot, especially if you were born between the 5th and 13 of June.

Mercury is your planet, Gemini. In May, June and the first week of July Mercury will be in your sign. Are you born between 2 and 12 June? Then Mercury will visit you twice in a year and stimulate relationships and contacts.

Your holiday can be celebrated best in May or June, February/March or September.

A special message for those born 9, 10 or 11 May and about 64 years old: October might be tense and/or exciting, a month full of adrenaline.