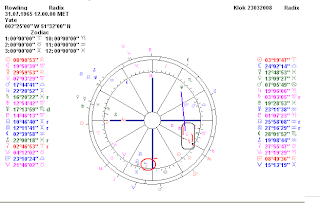 J.K. Rowling (born 31st July 1965 in Yate) has told the world that when she was a divorced woman on her own, when she was very poor, she considered suicide. She went to a doctor and behavourial therapy made her better. Now she is one of the richest women in the world! J.K. Rowling wrote the Harry Potter books. Astrothème used to provide an hour of birth of about 14 hours for her, but has removed that. So I guess, there is still no HOB for Rowling.

J.K. Rowling has a calling Mercury (no major aspects in sign within an orb of 5 degrees) and that refers to a call for writing. Look at the importance of an oriental (positive!) Jupiter. Now we have two prominent planets: Mercury and Jupiter. And the combination says: succesful communications. Notice that Venus is also 'calling', for arts and artistic skills. And what about the quintile between Venus and Neptune? It also tells us about being creative in arts.

But where can we find the depression? An early birth gives her Moon an opposition with Saturn and a conjunction with Pluto. That would be sufficient to see that there was a dangerous depression. For divorce we find Mars inconjunct Saturn.

I wonder what made her reveal the news about her depression. I see Jupiter trine and Uranus opposition the progressed Sun right now. It is an astrological statement for a relief (in combination) and for great content and ...news (apart). So maybe she tells this for all of us to know that there is help for who needs it and that it would be such a pity to give in when times are bad. Easter and Zero Aries contain the same message of hope for new beginnings.