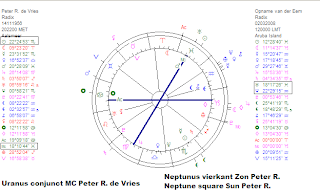 On February 13 I announced the square of transit Neptune with the Sun of Peter R. de Vries, reporter and investigator in the Natalee Holloway case. And on the 2nd of March that square was tight. Neptune was exactly 90 degrees away. What happened that day was an interview on the Aruban television with Patrick van der Eemst, the man who was working undercover for Peter R. de Vries and who challenged Joran van der Sloot to reveal things, they say...But now this Patrick said he knew Joran already 7 years! And that it took Peter R. de Vries several MONTHS instead of WEEKS to compose the story of the confession of Joran (who denies that he told the truth). Patrick even says that he knows who threw the body of Natalee in the sea!
All this cannot be good news for Peter R. de Vries. Actually, Neptune is doing his best to show that he is the planet of mystery, mist, media and misery. Also notice the Uranus conjunct MC transit for the shock effect.

The interview was published in Nieuwe Revu, a Dutch magazine.