OLDEST MAN OF THE NETHERLANDS (108) DIED
And what about Uranus oriental? 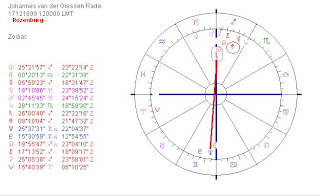 In my book Astro I.D. on page 37 (only available in Dutch) there are several examples of Uranus rising before the Sun, like on the day that Van der Giessen was born. An oriental Uranus seems to be one of the protective factors in a human life. I also mention Jupiter-Uranus as one of the indications for living long. In the chart of Van der Giessen you see Jupiter calling (without a major aspect in sign), so both Jupiter and Uranus are prominent in his chart. He also has 5 (!) midpoint combinations (see below) with Jupiter and Uranus, even without calculating the MC, Asc and Moon. There is no special score in the elements, but at least 60-70% op his placements are in movable signs. Possibly he was 'moving around' still. That is also why he could fall with his rollater.

On his day of birth the Sun is conjunct Saturn. The opposition between Sun and Neptune is even tighter! You see that these aspects do not shorten your life time when you deal with Jupiter and Uranus at the same time.

For more about aging...

Email ThisBlogThis!Share to TwitterShare to FacebookShare to Pinterest
Labels: Life and death, Uranus