OBAMA LOST
and how about McCain for president? 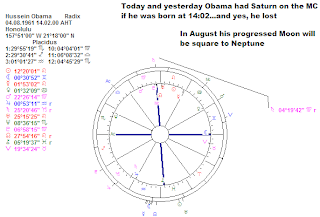 Had I known that the pre-elections and the election of the Democratic candidate last until August, I would have looked further than February 17. Because with the present transit Saturn on the Midheaven of Obama (for 14:02) it is hard to win, or you take up more responsibilities than you can handle. Ordinary people get a mortgage that is just too expensive or they become a parent and feel it as a heavy load. Obama lost today. He had so many favorable aspects with Jupiter, but the battle continues and the stars keep moving...
MCCAIN FOR PRESIDENT?
It is getting more and more difficult to do any prediction. On January 3 I found out that there is a strange interaction between the charts of John McCain and Hillary Clinton in November 2008. But since she could be the vice -president and so could Obama...It might be that both would still be a top politician in November 2008, unless McCain wins. So I am sorry, I don't know who will become the next president of the USA. There is even more confusion in the stars. Pluto of Obama is conjunct the Sun of McCain. Mars of McCain is conjunct the Sun of Obama. It looks like a battle coming up:) And the secundairy (progressed) Mars/Pluto of McCain is right on top of the progressed Sun of Obama on the 6th of November. But given their progressed charts, I guess McCain is better off with the Progressed Midheaven sextile Pluto and the Progressed conjunction of Jupiter and Ascendant. Better off than Obama, who in November has Sun semi sextile Uranus. And if I am right about 14:02 for him, the Progressed MC will be square progressed Saturn in November for Obama. Sorry, Democrats...

For more about Obama...

PS
On June 14 the hour of birth of Barack Obama became public knowledge (19:24) and that makes a difference. See:
message and comments of June 13/14


ADDED JULY 2008:
Please select 'Elections' below to find the latest news and additions. The McCain DOB has altered! And so did this 'predction'.