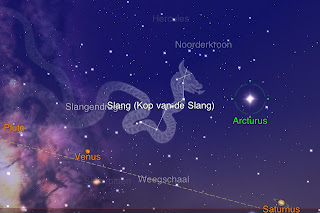 Yesterday morning, shortly after 11, I opened my StarWalk App (great tool!) on my Iphone and watched the South-Western part of the sky, just for fun. It happened to be the moment that Ophiuchus (Slang/Slangendrager in this picture) was right opposite me, just above Libra (Weegschaal) with Venus on the edge of both and Saturn just above the horizon. Even Pluto is part of the picture. Saturn and Pluto are on either side of Venus. Of course, all that was invisible for the eye. It was daylight and even if it were night: there were clouds. If I hadn't had StarWalks, I would have been able to guess the positions of Venus, Saturn and Pluto when I looked direction South-West, but I would have been completely wrong about the constellations if I used the chart of that moment:

This morning the Sun had not risen yet, when I tried my StarWalk App again: 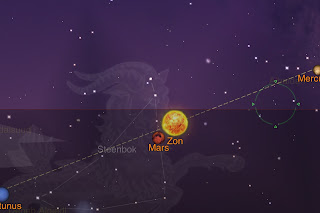 The Sun (Zon) and Mars are close and just as close is 'Steenbok' (Capricorn for you). Sun in the constellation Capricorn, not in Aquarius today. Mercury has just risen.

A few days back I tried 'public transportation' again and of course I ended in the wrong corridor, just like an English speaking man who said: 'I am confused! I want to get out!' 'But', I said, 'How did you get in without a ticket? You need a ticket to get out'. 'Does it matter?' he said.' Now that I am in, I want to get out'. And he followed me right through the doors, pushing them away by force and freed himself. It is a bit like I feel today.

The picture of the sky is beautiful. How I would like it to be the picture of today's chart...But even sidereal astrology doesn't produce the right picture (because the signs have different sizes!). BTW It's that we know that someone needed to name this constellation 'Capricorn' but I don't see a goat at all, without those lines. The history of naming the constellations is a mystery in itself. And that brings me to the next post...
Geplaatst door Astromarkt op 1:34 PM