The progressed Sun's beneficial aspects and transits often mark the start of a career. For example:

I read that Lily Allen created a MySpace account in November 2005 (with transit Saturn square natal Sun) to launch her music, after being introduced  to London Records - without results - using her father's connections in 2002*). That was just before her progressed Sun sign was changing. When the progressed sunsing changes, life changes.
One month later, in December 2005 transit Pholus was opposition progressed Sun and transit Jupiter also was opposition progressed Sun. That is a statement for a positive (Jupiter) turning point (Pholus) in life's development (progressed Sun)...shortly after 'changing lifestyle'.  Those three indications together were for a boost in her career.


That is just one example. I mentioned Bill Gates in this post about progressions and career. Progressions with Jupiter and Pluto marked pleasant moments of progress in his position. 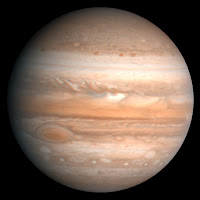 Jupiter is of course the symbol of fortune and growth (usually!) and a great help on the way. That is why we might expact benefits for Barack Obama, whose progressed sun sign changed a few months ago and whose first aspect in the new sign is a trine with Jupiter. It is a great test case for Jupiter trines!:)