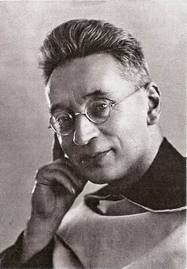 Today started a Twitter-campaign for Titus Brandsma, the priest who lost his life in a Nazi-camp in 1942. The campaign starts on the day of his arrest, January 19, 1942. He died 6 months later. Here is the link for followers: http://twitter.com/fathertitus42


ARREST
Today 69 years ago, on the day of his arrest transit Pluto is inconjunct the natal Sun. That is an astrological warning for life threatening danger and stress.. This transit remained active during the next six months , until he died (July 26). Also progressed Mercury is inconjunct Midheaven (remember that it were his words and his opinion about the nazis and what they did to the Jews that brought him in this position). Continue to see the charts and more...

NATAL CHART (leadership, action and belief)
The natal chart of Titus Brandsma has an unaspected Sun (that means leadership, drawing attention somehow). Mars rises before the Sun and Pholus (the activist) and is semi square Sun/Moon (motivated by action). Neptune is opposition the Midheaven, perhaps pointing at the religion/faith on the background of his actions. The Sun and Neptune's prominence resonate the 'holy man', the idol and Mars adds activism. Varuna is semisquare his AC/MC (for fame?). His life ended sadly. Watch the combination of Mars in Capricorn square Saturn and trine Pluto and Mars/Saturn midpoint 105 d. Pluto. It is the dangerous combination of unnatural death as a theme in life. A nazi doctor gave him a deathly injection with transit Pluto inconjunct the progressed Sun when the True Node was opposiiton his natal sun. Transit Neptune was inconjunct the progressed Ascendant of this B-rated chart. And we see transit Jupiter (ruler 8th house of death in the progressed chart) on the P IC (impersonating the doctor related to the end).

RELIGION
Jupiter-Neptune is the religious component, see Astromarkt about that, and that is also true in the chart of Titus Brandsma.
- Neptune is half semi square Jupiter and 67.5 d (semisquare + half semisquare) the Sun
- Sun in Pisces (ruled by Neptune), Moon in Sagittarius (ruled by Jupiter)
What he said was:

Here are the chart drawings. BTW: Transit Quaoar is conjunct natal Moon and square the progressed Moon of Titus Brandsma today. I don't know what to think of that...