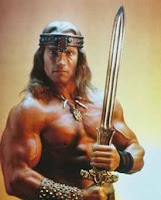 An example of a change without transits and progressions with the progressed Sun is the A-rated (not AA!) chart of Arnold Schwarzenegger, who stops being the Calfifornian Governor on January 3, 2011. His progressed Midheaven is changing sign instead...

Here is his progressed chart:

You can see the reading of his birth chart on Art&Astrology, the blogspot about artists and talent in the chart:
http://art-astrology.blogspot.com/2009/07/astrology-chart-arnold-schwarzenegger.html
Quote:

As from 1984 (when in the progressed chart Saturn and Pluto were conjunct Ascendant) he presented himself as an active Republican, but he had been a Republican since 1968, when he entered the USA and heard Mr.Nixon*) speak, a President with Mars inconjunct Saturn and opposition Pluto, so with the same 'die hard' combination in the chart as Schwarzenegger. And what he said appealed to him...

Let me show you the progressed aspects and transits:
The combination of Mars and Saturn with Ascendant/Descendant shows a death end horizon.
Of course the lost elections triggered the change and we should look at the transits and progressions of November 4, 2010, too. Progressed Mercury had just been inconjunct Midheaven. Inconjunctions refer to losts. But Jupiter had just been conjunct Midheaven, because he won the race (and Megan Fox lost).
PROGRESSED MIDHEAVEN EXAMPLE:
When Larry King's Progressed Midheaven changed sign in 1985, he started his career on television.
MORE SIGNS OF CHANGIN TIMES:
http://astropost.blogspot.com/2009/06/astrological-signs-of-changing-times.html
*) Your status at home might change when you become a parent, or an 'orphan', for example. The MC is about 'ranking'.