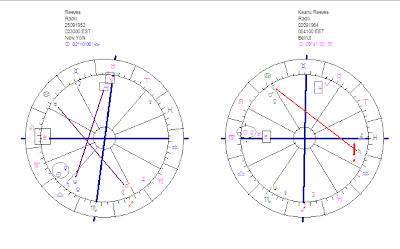 In my files are two Reeves: Christopher Reeve and Keanu Reeves. They are no family, not related. But they share things. When you ask a person what comes to mind first when he hears the name, he might say: Actor! The other thing they share is having experienced a crash that left scars. Keanu recovered after a crasch with his motor bike; Christoper ended paralised after falling off his horse, and later died too soon.

SHARING....
A passport tells us name, date of birth, place of birth, gender and 'special marks', like scars, different colour of eyes etc.. The special marks in the astrological passport of the Reeves show Jupiter in a top position (but Christopher Reeve has the destroying Vulcanus conjunct MC). Pluto is on the ascendant of both (but it is the oriental planet in the chart of Christoper). Both have Sun conjunct Mercury, tightly connected.
So they share a prominent Jupiter and Pluto on crucial spots of the chart. But Keanu Reeves has Saturn calling (caution at any possible level!), Christopher has Vulcanus on the Midheaven.
This tells us that they probably will experience the results of a positive attitude towards winning, gaining money and influence or power. And that Keanu might have ambitions of various kinds and that Christopher might show a destructive condition or postion.

ACCIDENTS
Keanu Reeves rides bikes in the dark and he had a rather serious accident years ago. Sun conjunct Uranus and Pluto tell us that he might act on impulse or experience sudden dramatic changes in life. Midpoint like Mars and Neptune connected to Saturn/Pluto confirm that there is a certain dainger for bad injuries. And BTW look at MC = 67.5 away from Jupiter/Neptune...the sign of the person with succes in the immaterial field or...fans.

The tightest aspects in the chart of Keanu Reeves is Moon sesquisquare Saturn (orb 17 minutes). His younger years were sad and so are his memories and experiences. He has a sad look, too. He might be overly introverted with only placements in earth-and watersigns. Without placements in fire or air, he not only lacks 'spirit for life' and 'reason' sometimes. Fire is calling and so taking risks, being overly agressive and sportive (like ADHD children) might show as a result of that. It might explain why he likes driving bikes in the dark,without light and at full speed. The lack of placements in air signs point at communicating at any level.

SHARING PLUTO ON ASCENDANT
About Pluto conjunct the Ascendant: I wondered about their role (in the movies or in real) of anti-heroe,but also about Pluto as the symbol of money, sex, life and death. It is clear in the life of Christopher Reeves, but did you know that Keanu lost a dear friend (River Phoenix) a sister (leukemia), a baby and an ex wife? Pluto is on one site of his horizon, Chiron is on the other side.

Of course Pluto does not always show up as the vivid death! Pluto is also there in the charts of those with (sex)power and influence, when the people around are impressed by the strenght and force of the person involved. In the study of Ken Gilmore (see Astrodatabank) the majority of the children with Pluto on the Ascendant managed to survive a violent attack at their school. He contributed that to 'being invisible'. I think that when you have Pluto on the ascendant a certain experience impressed you so much that it changes the way you look at people, for good. And the fact that they survived: strategy, being vigilant always and knowing how to defend yourself.