I told you about Koko, the 'talking' gorilla with Mercury-Jupiter-Pluto as an example of how astrology works in the charts of animals, too. But there are more VIP animals.. 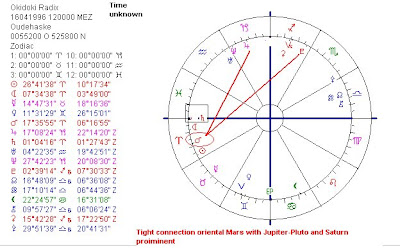 F.ex. look at the chart of a top horse, Okidoki, born April 16, 1999 in Oudehaske (Netherlands) with an oriental Mars square Jupiter and sesquisquare Pluto (for a lot of energy and succes). He is called 'careful' and look: he has a prominent Saturn! There is a sensible side on the horse, says his rider and we notice Sun square Neptune and the calling Venus!
On the day that there was a special item about the horse on television, he had transit Pluto trine Sun and transit Saturn trine progressed Sun: a statement for deserved respect. 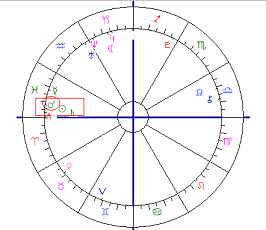 Or what about Bonito, the biting gorilla? He severely hurt an adoring female fan after jumping over the water barrier. I mentioned him on May 18, 2007 like this:
"BOKITO, the gorilla that escaped on May 18th in the Blijdorp Zoo in Rotterdam and bit one of his female admirers over a 100 times, is world news. In his chart you might immediatelly notice the prominent position of Mars, being oriental and conjunct the Sun. Such a position gives enterprise and whit difficult aspects: agression. In his chart Mars is conjunct Saturn, so that the energy and drive is being limited and blocked. That might make angry. Dogs with this aspect sometimes bite out of fear."
Bokito was born March 14, 1996 in Berlin.

Notice the difference between the 3 charts.
Two animals famous for doing the right thing (being great in communications or sports) and one notorious for his attack. The first two have a significant and even prominent planet (Mercury for messages or Mars for competition) and in aspect with Jupiter and Pluto, the combination of succes.
The last one hs a prominent Mars afflicted by Saturn. Astrology works, even with animals.
...It is just that it takes a look at the special marks in the chart (the prominent planets) and the most tight aspects.
Geplaatst door Astromarkt op 11:43 PM