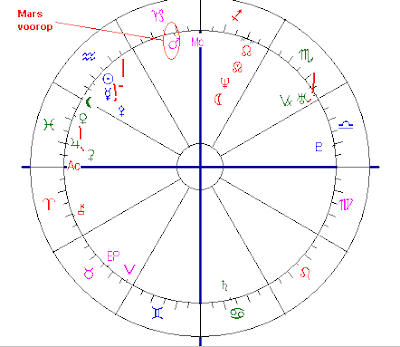 Giovanni van Bronckhorst was the star in Bern last night. It was not just a good day for him (transit Sun square Jupiter and square progressed Sun) but it will be a good year in general, too. His progressed Sun is steaming up towards a conjunction with Jupiter. Jupiter is the planet of progress and successes.

Giovanni van Bronckhorst was born February 5, 1975 in Rotterdam, a good day for a football player to be born. Why? The Sun does not make major aspects in sign or orb (for performance and leadership). Mars is rising before the Sun for an orientation on activitities and prominent energy. But is not just Sun and Mars that draw attention on his birth day. Mercury (communications), Jupiter (the international...) and Uranus (making the world a better place right now) are 'calling'. They are not making Ptoloemeic aspects in sign or orb. The succesful combinations of prominent planets (Sun-Mars-Jupiter for example) are confirmed by midpoint combinations such as Sun conjunct Mars/Jupiter and semi square Jupiter/Pluto or Aries Point square Jupiter/Pluto.