EC AND ASTROLGOY:
DUTCH COACH OF RUSSIA, RUSSIA AGAINST HOLLAND 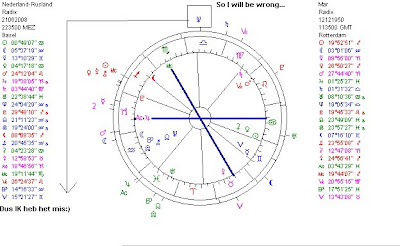 Guus Hiddink is a very good Dutch football coach. He manages Russia to the European Championships and even got them in the quarter finales! Now, on the 21st of June, Russia plays against The Netherlands (coach is Van Basten). I wonder about that game...

WARNING: I WILL BE WRONG!:)
You know that I try to preview the final score of football matches by looking at the positions of the planets in the natal chart of the coach and the actual Midheaven. The nasty thing is that the whistle on the end of the game is often NOT in time (in the cases below 22h30) but up to 8 minutes later! And sometimes even more, when there are penalties to be taken. So don't bet on it, I don't either:) This is an experiment! An experiment that will fail anyway. It might be confusing for you, but as you see in the above chart, my Neptune is right on top of the chart of the final moment and so it seems that I will be all wrong:)

THE CHARTS
If you are still interested in the charts and my reading, please continue:)

Here you see 3 charts of final moments with the positions of the coach on the outside. Sun and Jupiter are for celebrations, agreed? And Neptune is more contemplating, at least, ok? Now look at the charts... 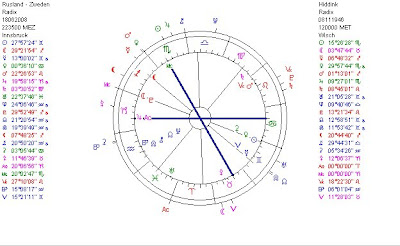 a. Russia - Sweden in Innsbruck incl. ca. 5 minutes 'injurytime', positions of Hiddink on the outside. Results: Hiddink wins!
And his Sun and Jupiter are on the actual MC 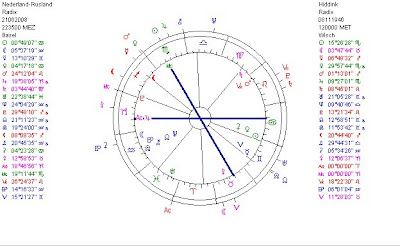 b. Final moment Holland - Russia in Basel with positions of Hiddink.
Clearly the same Sun and Jupiter on the MC! 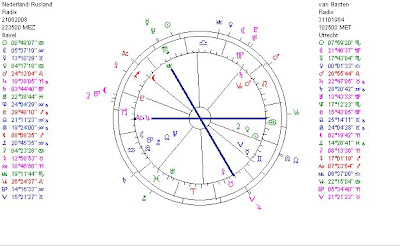 c. Same moment, now with the positions of VAn Basten, the coach of the Netherlands.
Do I see Neptune?:( So, eh...

It is unbelievable and I dare hardly say so, but according to these charts, Russia might even win. But, because of the fact that both Hiddink and Van Basten have a Solar transit - Venusday, I guess they will end up equal. But in that case, there will be penalties and if the real end of the game would be 22h50, 'Orange' will win the game.

You know what? I will be back when the game is over:)