BIRTH CHART GENE ROBINSON
A bishop who got married 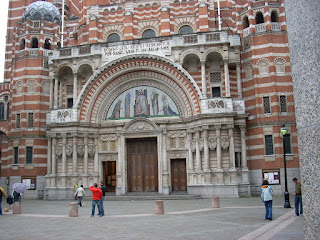 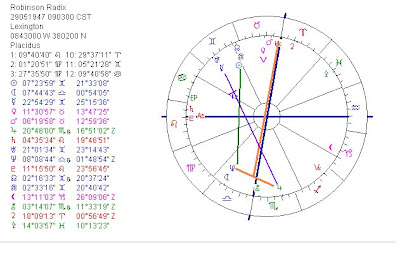 In 2003, when his progressed Sun changed sign, Gene Robinson was elected bishop of the Episcopal Church in the USA. His election caused a schisma. Theological conservatives left the church. He is openly gay and today he proved his noncelibatance by marrying his 80-year old partner. Between 2003/2004 and now there is February 14, 2006. That was when he was treated for alcoholism. Certainly not a dull moment, in the last years...For astrologers it is not surprising to see progressed Sun semi square Uranus right now (for the upheavel and news and BTW: Uranus happens to be his ruler 7), but there is also progressed Sun square Ceres (the planet of heirdoom and seeds). I guess that it refers to a bond that is not 'productive'. Any other ideas?

Look at the positons on his birthday (29th May 1947, near Lexington Kentucky). Venus tightly square Pluto, Mars oriental conjunct Venus. It is a statement for being full of passion.

His theological interests are to be found in the trine of Sun with Neptune and in the 'calling' Jupiter. Jupiter does not make Ptoloemeic aspects in sign or orb (5d). Jupiter is inconjunct Uranus.
Jupiter-Uranus is one of the influences in the charts of modern popes. The other one is Jupiter-Neptune. I was positive that Jupiter or Neptune will be placed on a crucial spot in his personal birth chart or that they are strongly connected to the Midheaven. But I could only prove it with an hour of birth. I found 9:03 a.m. on Astrodatabank. That is with: Midheaven opposition Jupiter/Neptune! A midpoint yod with the combination for acting, believing and followers.

Pluto is crucial in his chart, conjunct the Ascendant. That is a statement for the importance of affairs of money, influence, politics, life and death and ...sexuality. Another thing is the Midheaven position in Aries, in the final degree. There is an out of sign square with Saturn, very interesting in the chart of a clergy man who deals with hierarchy and the possibility of a forced step back that he risked. Pluto's prominence is for courage, too.

Two out of four, that is enough. He did marry, so we should not expect conflicts between the houses 1 and 7, should we? And there are none.