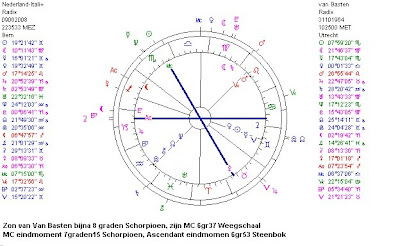 Here you see the chart of the final moment of The Netherlands - Italy in the European Championship 2008, played this evening (Holland won with 3-0!:). Outside the circle are the natal positions of Marco van Basten, the Dutch coach.

To predict the results I have tried before to look at the final moment of the game and the positions of the natal or progressed planets of the trainer, in this case Marco van Basten. I think Holland will win the match Netherlands-France, because I see his Sun on the actual Midheaven in this chart, just like it will be on July 9 (Holland-France). But ...

The Netherlands-Rumania on the 13th might be disappointing for Van Basten (as his Neptune is by then conjunct the actual Midheaven of the final moment). We will see...To be complete I should also check the charts of the Rumanian and France coach, of course...Maybe later.