BIRTH CHART MICHELLE OBAMA
She got the spirits! 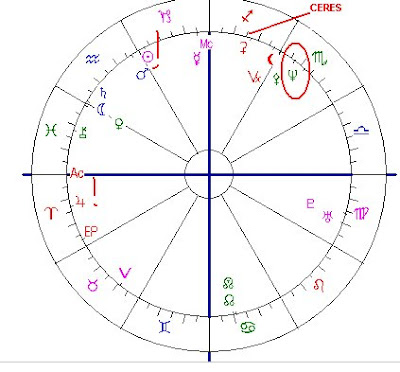 !See also the guess chart for Michelle Obama on this blog, here...

I like the combination of the charts of Obama and his wife Michelle (born 17th January 1964 in Chicago). Her Jupiter is tightly trine his Sun (she is a great support to him), her Mars tightly trine his Moon (they are attracted...:).

His Mars is inconjunct her Saturn and his Saturn conjunct her Sun, with his Uranus inconjunct her Sun. The 'limitations of freedom'- combination of Saturn and Uranus are linked to her life. So maybe his carreer obliges her to limitations. She certainly won't be able to say what she thinks and feels any more! She has already found out what impact her words might have from now on. As the interaction is very tight, I am afraid that protocol and restrictions will be hard to deal with.

Michelle is an idealist and a believer (Neptune oriental) with a calling Sun and dito Jupiter. Jupiter is biquintile Neptune. You see the combination of the 'believing audience'. It could also have been the birthday of a spiritual leader! And she might be her husbands'fan!:)
Michelle is a performer and she probably loves to travel around. I suppose that her personal chart, with hob, will reveal the choice for laws (though Jupiter is a good indication, too).

It might be revealing to have a look at her chart to see if she will move into the White House. But it takes an hob to be certain, so I won't speculate about it, since there is not much to see in her transits. But her Jupiter/Pluto midpoint is related to the Sun of November 4...