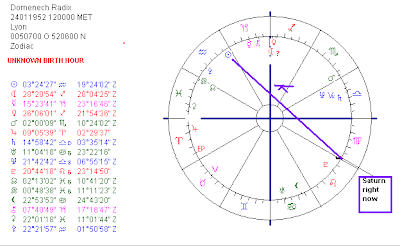 Raymond Domenech, the coach of France in the EC Football 2008 was born January 24 1952 in Lyon and he is an astrologer, too. It seems he uses astrology in his work. Now that he lost, this fact is used in the media to put him down even more and to laugh about astrologers, of course.

I don't know how much he knows about astrology. What he knows is, that he is an Aquarius and that is why he avoids Scorpios and Leos in his team. Not the finest choice, since in the Dutch team (that defeated his) Marco van Basten is a Scorpio and so is the keeper (Van der Sar). If you want to know more about sunsigns, click here or see the article about the basics of astrology, (sunsigns, elements, aspects etc.).

In Sportwereld the link with astrology is called 'silly'. Well, we astrologers ARE, arenot we?:) The article says that Domenech said beforehand that up till June 11 'the stars' would not be on his side, but that it would be better after that day (but the article does not mention why).
I wonder if Domenech was aware that he has transit Saturn inconjunct the Sun right now. And if he knew what the impact of the chart of the coach is for the whole team. (Imagine, when a team fails, most of the time the coach is dismissed afterwards! So the positions of the coach's chart is of importance.)

The interest in astrology often goes together with Jupiter-Uranus connections. Domenech has Sun in Aquarius (ruled by Uranus) with Moon in Sagittarius (ruled by Jupiter). Jupiter is square Uranus. And Uranus is linked to the midpoint Mercury/Jupiter.

I wonder, would his knowledge of astrology have been limited to starsigns only? Or did not he say much more to avoid being called a looney? The article in 'Sportwereld' and moreover, the reactions of the readers, demonstrate what the general opinion is (certainly in The Netherlands) when astrology is concerned. One of the opinions of the reader is that sport or football has nothing at all to do with astrology. But as you may have noticed on this blog, astrologers can have a look at the prospects, the coaches and the football players:)
Geplaatst door Astromarkt op 10:29 AM