BIRTH CHART OF PAUL NEWMAN
who has been hospitalized 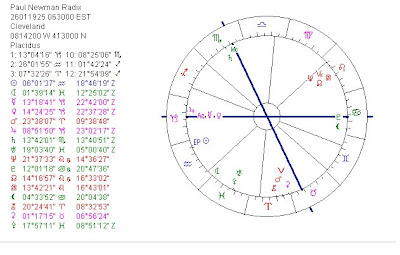 They say that he is in hospital for a rash and losing hair, but friends say that he is seriously ill (cancer of the lungs). On the 25th of May 2007 he said he would stop acting because he cannot work at the level he wants no more. His progressed Ascendant was opposition Saturn in the year before.
Paul Newman was born 26th January 1925 at 6:30 a.m. in Cleveland and is 83 years old now. His progressed Sun is about to change sign. Today, the progressed Moon is conjunct Uranus (for a sudden change or a moment of upheavel).

Paul Newman is a 'mister nice guy'. He is a great actor. I particulary loved his role in The Long, Hot Summer as Ben Quick, a serie that I saw as a kid:).
As an astrologer you can imagine that he has a prominent Venus and he has. Venus is crucial, placed on the Ascendant, together with Mercury. Another important placement is that of Pluto on the descendant, opposition Mercury and Venus and Jupiter...There are several combinations that point as succes in art, in love, as an artist etc. simply using these prominently placed planets. Also notice the 'calling' Sun (no major aspects in sign or orb 5 degrees), pointing at the importance of performing. The show must go on when your Sun is calling. And Paul Newmans' show has been a long one. He did not stop working in 2007. From that moment on he dedicated himself to his restaurant and to seriously ill children. Why?

THE MOON CALLING
First of all I think it is because of the 'calling' Moon in Pisces. Moon symbolises food, caretaking, education, children, needs, cooking, environment, remembering, housing, and...reflecting another person (acting!). The prominence of the Moon lead him to his restaurant, to the children, and to caring and to acting.
He also founded the Scott Newman foundation after his only son Scott died to an overdose in 1978 (notice that the Moon is in Pisces). That was with the progressed Sun changing sign, too (30 years ago), Solar Arc Pluto inconjunct Sun, and with the progressed Midheaven semi square Saturn, the most elevated planet in his chart.

Secondly, I like to point at the crucial Pluto on the descendant. Pluto symbolises a.o. politics (he supported McCarthy against Nixon), prizes (he received some:), influence, and confrontations with life and death.

RACING
There is so much more to tell about Paul Newman. In 1995 (with MC conjunct Venus) he managed to win Daytona at age 70! He started racing in 1969. Do you mind if I attribute that to the 'calling' Uranus in his chart? Uranus can be very stimulating.