LOOKING BACK AT THE CHART RUSSIA-SPAIN AND...How about the EC2008 Final? 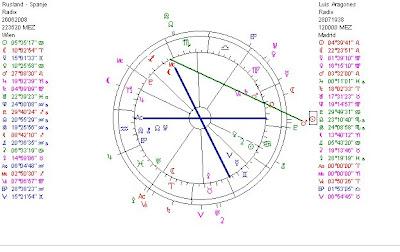 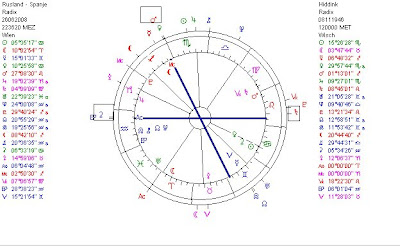 RUSSIA-SPAIN
It is a clear picture at that moment and at that place: Sun of Aragonès conjunct the Descendant; Saturn and Mars are crucial in Guus Hiddink's case with a crucial Ceres on the Ascendant inconjunct his Sun. Inconjunct = for losing and giving up. Saturn is not the right planet to win a game with and Mars-Saturn in combination is 'end of fight, disadvantage of sports, dead end of energy'.
BTW I like the special role Ceres has in this chart. Ceres of Hiddink (the coach of Russia) is on the Ascendant of the final moment and... inconjunct his Sun. Ceres symbolises a.o. 'harvest'. And the 'harvest' had a mismatch (inconjunct) with his Sun.

It is obvious, provided that you know when the match finishes and up to now that might be up to 8 minutes after the official moment (and up to 38 minutes after prolongation).

THE EUROPEAN CHAMPION: SPAIN OR GERMANY?
With all that in mind I hesitate to look ahead at the final game on June 29, 20h45 - ??

I think Spain might be the winner. That is because at 22h34 Aragonès has his Sun trine the Midheaven of the final whistle (that I plan at 22:34:00:)
He also has Jupiter trine both progressed Mars AND Uranus. That 'shapes'a large trine of the combination Mars-Jupiter-Uranus, a combination that I consider to be the sign of a succesful operation or ...match.
His opponent Joachim Löw has Neptune on top at that moment, square Ascendant. I have been considering the effect of Venus-Neptune in the last game, but...Neptune is crucial now (tightly square Ascendant) and his Pluto is tightly square Midheaven! That combined with the positions of the Spanish coach makes me think that Spain will win instead of Germany. Also, transit Mars is afflicting his Saturn...
But I might be wrong this time, of course. Astrologers have the same difficulties in predicting as the weather forcast teams have. Statistics usually fail to work the other way around. So the fact that the methode works, does not mean that it will always work.

I will be back about the final match Germany-Spain later, with the charts.
Geplaatst door Astromarkt op 1:36 PM