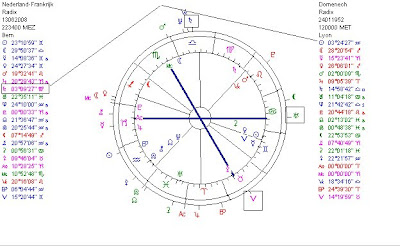 Football, the EC2008 and the match Netherlands-France...in an astrologers' blog. I try to make a prognosis. Who will win, who will not? I think having a look at the chart of the final moment of the game, compared with the chart of the trainer or coach, will reveal a lot.

DOMENECH
Raymond Domenech is the French coach, born January 24, 1952 in Lyon. He practises astrology, is not that nice!? The confirmation of this fact is to be seen in Sun Aquarius/Moon Sagittarius with Jupiter square Uranus (and sesquisquare Mercury/Jupiter). But...will the stars be on his side tomorrow? en hij doet aan astrologie! Leuk gegeven, dat je bevestigd vindt in de combinati

Transit Jupiter will be square the Ascendant on the final moment, provided that that moment is 22h30 and not 5 minutes later like in the game Switzerland - Turkye (with fatal results for Switzerland...and pleasant ones for Turkey). Because every minute more makes the actual descendant come closer to Uranus and makes the Saturn of Domenech get higher and higher in the chart. Notice that transit Saturn is inconjunct the natal Sun of Domenech these days and that the progressed Sun is about to change sign.

HENRY
To be certain I checked the chart of Thierry Henry, born 17th of August 1977 at 18h45 in Poitiers. In his chart Uranus is conjunct MC and at the final moment his Uranus is conjunct the actual MC, too. Will he cause upheavel or will there be tension, a surprise, something unexpected? There are no signs of joy and transit Neptune opposition his Sun might point at a disappointing period in life. Maybe he does not even play!

VAN NISTELROOIJ
No, the chart of the Dutch Van Nistelrooij is more fortunate with the Sun on the descendant of the final moment of the game. And Marco van Basten'Sun is close to the MC of the final whistle.

HOLLAND WINS
So my guess is that the Netherlands win this game, maybe in a game that causes tension and excitement in the final minutes. I will see it tomorrow! And don't think it is bias. My prognosis for Netherlands-Romania is completely different.But I will have to check the Rumanian coach as well, of course.