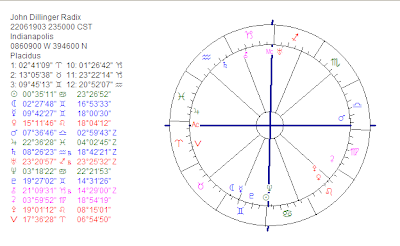 We see a very important Sun square Aries Point on the IC (leading role), conjunct Neptune (an idol, a double life) with Pluto oriental (money, power, force and strength first). The Moon - education, family and environment - is important, as the Moon is calling (not making Ptolemeic aspects in sign or orb - 5 d- ). His mother died when he was a kid and later he loved his stephmother. A calling Moon is also a hint. It tells us that his NEEDS were important, he needed to 'feed' himself no matter how. An unaspected Moon easily leads to addictions and misbehaviour, because the person involved does not really have control over his needs.

There are no placements in earth signs. That is an important signal for materialism. Please read for more info about about the missing element on my site Astromarkt.

Immagine the moment in time and place (the gangs ruling), and picture yourself a 'material boy' (no earth signs, Pluto as an orientation) who is poor and probably rebellious (Uranus on top, semi square Saturn)...It seems he could not hold a job (and he had been fired dishonoraby after deserting the U.S. Navy).
This chart also tells us about the item of the 'supernatural' 'mystical' or 'criminal' (Neptune/Pluto). Imagination, fantasy, vision and anything that is unseen and hidden ...was crucial in his life and background. Neptune is also the planet of drugs and alcohol and ... the movies. It seems that he copied the way he robbed banks from the movies.. The crucial placement of Neptune might also refer to his desertion as a crucial decission.