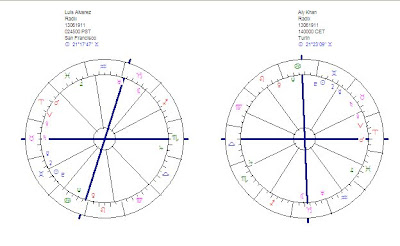 Uranus conjunct MC reflects a hectic moment in time, pure tension and explosive tendencies. Sometimes Uranus simply brings 'news', sometimes, like on the moment of the bomb on Hiroshima Uranus means 'explosion, disaster'. So what will it mean when you are born with Uranus on your Midheaven? It means Uranus (=news = explosions = tension = a big change or revolution) is crucial in your life. And it was in the life of LUIS ALVAREZ, born 13th June 1911 in San Francisco at 2h45 PST, who was a fysic, busy with atomic energy. Uranus rules his equal 10th house, as it happens and is biquintile Sun. That means that he had creative 'impulses' or ...that he was inventive.

Saturn is just as crucial in his chart. Saturn is conjunct the Ascendant, ruling the Midheaven and semi square Aries Point. Also, Saturn is rising before the Sun and the not unsignificant Mercury in Gemini - end dispositor of the MC routing -, only making a wide sextile with Venus. And there is more: the mdpoint Sun/Moon is connected to Saturn, so that he is in heart and soul a professional, an ambitious man. This makes Saturn even more prominent than Uranus is. Alvarez was first of all a man with a serious aproach, a scientist who's life goal it is to transfer messages (Mercury).

Saturn, Uranus and Pluto are what I call 'calling', not making Ptolemeic aspects in sign and within an orb of about 5 degrees. The prominent scientist is also a person with a call to change the world and have immediate influence.

Look at Sun in Gemini and Moon in Capricorn for the Mercury-Saturn connection that is so frequent in the charts of scientist and see the distance between Mercury and Saturn: 15 degrees, a quindecile.

In 1968 he got the Nobel Prize:
- in the year that progresses Midheaven was opposition progressed Venus ( a wish coming true),
- progressed Sun was square progressed Mars (an adventure) and
- right after progressed Sun square Saturn (ruler MC)
- and. transit Uranus trine Uranus

Of course there are more indications for his fame and his works. I just mentioned the most 'visible' ones, the planets that mark his Astro I.D. I also like to mention the impact of Sun and Jupiter in a hard aspect with the midpoint Ascendant/MC.

Luis Alvarez had Saturn, Uranus and Pluto prominent.
Aly Khan had Saturn, Mars, Uranus, Pluto and Moon prominent. Do you see what I see? Mars, Uranus and Pluto are prominent and so are Mars, Saturn and Pluto. Two combination for unnatural death and accidents. I have mentioned several examples of those combinations in this blog and on my site Astromarkt. Please check the items on the left.

BTW in 1960 Aly Kan's progressed Ascendant was in the 17th degree of Scorpio, that is opposition Saturn. Also the Midheaven was changing sign in progress and ...inconjunct Uranus, the planet of accidents and disasters. Just like in the case of Alvarez Saturn and Uranus were of importance in the chart. But unlike Alvarez there was a fatal moment in time where both the progressed Ascendant and the progressed MC made hard aspects, a.o. with a planet in the eight house of life and death (Saturn).