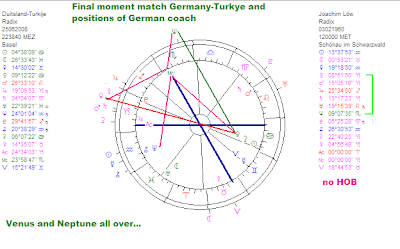 It is interesting that the Germans won in the final minute of a match that ended at 22h38m40s, instead of at the official moment: 22h30. It must not have been a relaxing 10 minutes for the players, fans and coaches! As I was unable to find a birth date of the Turkish coach on Internet at all (which is very strange) there are only two charts to look at: the chart of the match in Basel, June 25, and the chart of Joachim Löw, the German coach. I see music (Venus and Neptune) in the combination!

BIRTH CHART LÖW AND TRANSITS
Joachim Löw was a technical assistent before he became the trainer of the national team. An oriental Mars for a focus on sports, conjunct Saturn, tells us that he might be somewhat rigid in his methods. Jupiter is calling (no Ptolemeic aspects in sign or orb 5d) and that makes Mars and Jupiter the most prominent planets in the chart. Mars-Jupiter happens to be the combination of the sports international, a succesful combination that points at a lot of energy and doing great.

Now there were a few very tight transits at 22h38m40s with the birth chart of Joachim Löw, the trainer, born February 3, 1960 in Schönau im Schwarzwald. And there is a Venus-Neptune connection that I like to point at.

THE MIDHEAVEN TRANSIT
I use to take the MC as the most important angle, pointing at results. The actual MC of the final moment was 23d58m47s Scorpio. Venus of Löw is between 8d14 and 9d30 (as his birth time is unknown, I cannot be certain). So that is Venus semi square the MC and opposition natal Venus. The MC is also conjunct his midpoint Sun/Pluto. And the MC is quindecile Neptune (14d51).

A whole world of emotions! And that is not all for the day: Sun sextile Pluto (for stress and the will to win), Venus trine Neptune, Mars trine Jupiter...
I focus on the MC and the Ascendant, where I find Ascendant quindecile (75d)Neptune and 15d Venus, but more of importance for the results: MC septile Mars and quindecile Neptune (14d51).

VENUS AND NEPTUNE FOR VICTORY???
Every time Venus and Neptune come back.

3. His Venus-Neptune is in aspect with the transit Venus, Neptune and MC of the moment that his team won the game.

4. In the year of the EC 2008 his progressed Venus is trine Neptune and sextile Sun, while the progressed Sun is biquintile Neptune.

5. So that his progressed Venus and Neptune are 105 and 15 degrees away from the Midheaven of the final moment.

Maybe I should read that as: there was music in the moment?:) On the Internet I found that Löw is popular and 'Young Germans' called him 'a charming strategist'. I guess winning the match mad him even more popular. And as the finale of the EC 2008 occurs on a day that the solar transit is opposition his Venus and trine his Neptune, with transit Neptune semi square his Venus there might be music in the finales, too. But it also depends on who will be the other finalist, Russia or Spain. I am curious!

MC INCONJUNCT SUN = LOSING
Nihat Khaveci, the Turkish player, was not playing as he needs surgery. On the final moment of the game his Uranus is conjunct the midheaven. But Ugur Boral (14th April 1982 in Tokat) scored. As a matter of facts, he has Venus quintile Neptune in his chart...At the final decepting moment his Ceres is conjunct the Midheaven. On the 25th transit Neptune was sextile his Sun and Saturn square Uranus (tightly!). For the results I point at MC inconjunct Sun...The quincunx shows a mismatch between the moment and his vitality. In general inconjunctions symbolise lost.