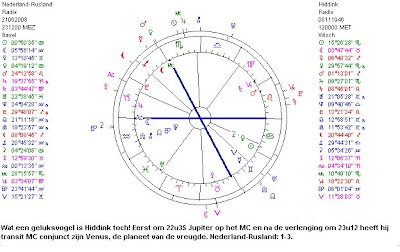 Guus Hiddink, the Dutchman who coaches Russia, had very good prospect for the game Netherlands - Russia. At about 22h35 in Basel the local MC was opposition his Jupiter. It was 1-1 and the game was prolonged. At 23:10 his Venus was conjunct the MC, the game ended and he had won.

Marco van Basten, the coach of The Netherlands, had Neptune conjunct MC at 22:35. Although the Netherlands performed very well before, the fact that in the solar return of Van Basten for this year Saturn was conjunct IC made me wonder about the victories.

For myself this is a moment that I value astrology even more than I did before (and that was already a high value:)
Geplaatst door Astromarkt op 12:02 AM