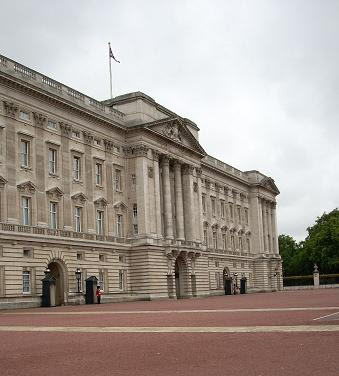 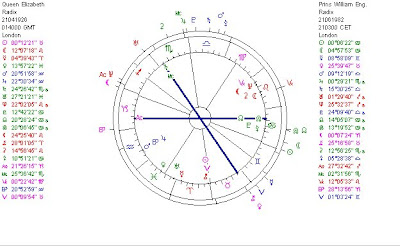 I watched the 'Trooping of the colours' on BBC and saw Prince William asking the Queen (his grandmother) permission to leave. That is when I noticed how sweetly she smiled at him:) I never saw her smile like that before. So, today, when she turned William into a knight, I like to take a look at the interaction (the synergy) of their charts. And I find: Venus and Jupiter, the planets of love and trust.

I found Sun sextile Sun (tighly!), his Moon semi quintile her Moon, his Ascendant square her Uranus, his NNode trine her Venus, his Jupiter opposition her Sun
and his Vertex conjunct her Moon, all in narrow orbs. His Venus is conjunct her IC! I think the IC-Node-Venus connections and the Jupiter-Sun link 'do it'. They can get along, she loves him because he is her 'next of kin' (and vice versa) and he is very supportive of her, he has her trust. It is nice to see, anyway.

I payed attention to Queen Elizabeth before, when she and Prince Philip celebrated their 60 years of marriage. Another relevant item is about Princess Dianan.
Geplaatst door Astromarkt op 9:39 PM