EUROPEAN CHAMPION SPAIN or GERMANY
What do the charts tell us?

Somewhere between 22h30 and 22h38 on June 29, the European Championship is finished and we all will know who the winner is. I like to do an experiment again and try to see beforehand which team will likely be the winner. It is complicated because of the varying final moment and it is complicated anyway, like predicting the weather.

I think Spain has the best chances. Why? It is not just a 50% chance and a favourite, it is based upon astrology and a certain method that I used before.
I think Spain will probalby win, based on the chart of the final moment and the tightest synergie between the cross of that chart and the positions of the trainers/coaches. It worked before, and it might work again, but we will only be sure on June 29. 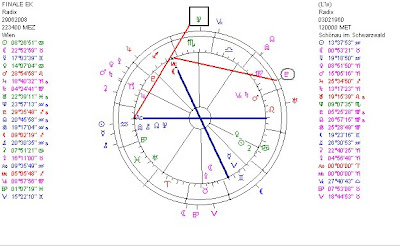 1. GERMANY
Joachim Löw has Neptune in 9d07 Scorpio. That is square the Ascendant of the final moment! I know that Venus-Neptune is important in his chart and was activated in the winning match against Turkey, but then Neptune was not crucially on top of the chart. Also, his Pluto is square Midheaven! There are 'bad' transits as well: Venus opposition his Saturn, Mars sesquisquare Saturn and Pluto semi square Sun (just like in the chart of Guus Hiddink). Although he has good prospects in general (progressed Sun square Jupiter), on June 29th he will not have his best day. 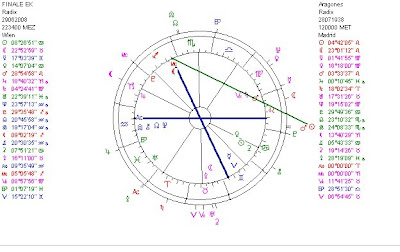 On the final moment the Ascendant is in the 10th degree of Aquarius and the Midheaven in 5d05 Sagittarius (trine his Sun, for a sunny moment:). Transit Jupiter is trine Ceres (good harvest).

DISCLAIMER:
Warning: this preview or prognosis is experimental! I started the experiment during the World Championships and I like to continue to see if it works. I publish this for verification reasons. The reader of this blog is a witness that I did not alter the findings after the game. I also publish this because it might be useful for the results of examns, elections, meetings etc. And if it does not work, I tried...Up to now, it goes fine, but you never know. Statistics sometimes do not work the other way around...

I also don't know the right final moment (at 22h44 it will be Löw's Sun shining on the Ascendant, for example). And results in the past do not necessarily predict those of the future. This is an experiment. So: a very carefully whispered...Spain is my favorite. Keep it a secret:) And come back for the evaluation.

RELEVANT:
the WC football predictions in Dutch only...
Basics of astrology