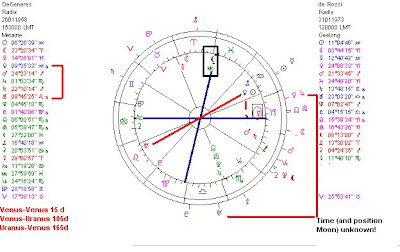 Her partner Portia has Venus conjunct Jupiter and both tightly square Uranus. So, Ellen and Portia share Venus square Uranus, so that both are gifted with artistic aspirations, sense of rythm and repeated new sensational feelings or loves that gives an impulse to get married immediately (sometimes too soon). It is fascinating that there Venus and Uranus are connected by quindeciles (15, 75, 105 or 165 degrees), minor aspects, but apparently important in this relationship. One of the indications for not getting married (Venus-Uranus) is the connection between the two and the connection is a sign of 'obsession'. Maybe they are obsessively in love:), I don't know, but I thought it was interesting to mention the link between the ladies. They share an aspect of Venus and Uranus and that aspect is srongly interacting between the charts. Venus-Uranus can also be read as 'free love' or 'controversial love/marriage' or 'extraordinary sympathy'. It is not a sign of homosexuality (hetero sexuals can have this combination as well), but it points at sensation related to love (just like a divorce in 'the old days' could be sensational, well, in fact in modern times divorce is still 'news'!).

Venus of Ellen is conjunct Sun of Portia (she loves her).
Mars is conjunct Mars (within orb 3 degrees) and that could be worrysome once that the romance would be over, because it shows competition as well as attraction and sometimes these synergies lead to fighting.
The upcoming year however, both have signs of celebrations in their charts. Ellen has Sun semisquare Venus, Portia had Sun semisquare progressed Jupiter, so together they can have a party (Venus-Jupiter).

Of course Ellen has a talkshow!:) She has Mercury calling (not making Ptolemeic aspects in sign), rising before the Sun (orientation on communications) AND opposition Ascendant. That is 3 times prominence for Mercury, the messenger. I wonder what to think of the position of the Black Moon Lilith (read Astro.com about it) tightly on the Midheaven of this chart. The link leads you to an explanation of the myth of Lilith, a woman EQUAL to Adam (not like Eve, subjective to Adam). Rather interesting idea that this symbol is crucial in the chart of Ellen. I understand that her 'coming out' drew a lot of attention and that for a period of time she sort of was forced to become an activist for the rights of homosexuals. The solar return chart of that year (1997) had Pluto conjunct the Ascendant. Pluto is the symbol of (a.o.!) sex and the Ascendant for (re)presentation. This year's solar return has Mercury on the Descendant (tightly now) and Black Moon Lilith conjunct the IC.