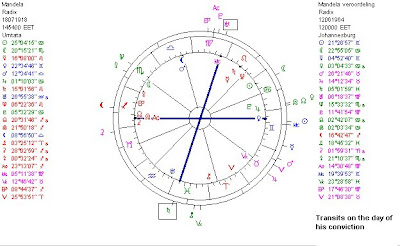 On June 12, 1964 Nelson Mandela was sentenced to life in prison. Here you see his natal chart (source is Noel Tyl: Vocations) with the transits of June 12, 1964. His life in prison started with transit Saturn opposition MC (for the lowest point in his life) and Uranus close to the MC (for a shocking change). Saturn and Uranus together are the symbols of freedom and its limitations*).

When he was released, 27 years later, on February 11, 1990 there was transit Jupiter conjunct Jupiter,ruler 1 - for pure hapiness. But there were hard political confrontations at the same time. They are symbolised by transit Saturnus sesquisquare the Midheaven and progressed MC conjunct Moon and sesquisquare Pluto. This is what made him drive straight towards the head office of ANC on the day and hour of his freedom. Pluto is for a comeback and Saturn certainly did not make it easy.

Oh yes..And of course the combination of Saturn and Uranus is present again: progressed Ascendant conjunct Uranus and opposition Saturn!

BTW...notice the position of Pluto, oriental in his chart for the impact of politics, influence, power, strength etc, that made him first of all a politician.

*)More examples of the limited-freedom combination are to be found on the left, Labels, Saturn and Uranus...
Geplaatst door Astromarkt op 8:46 PM