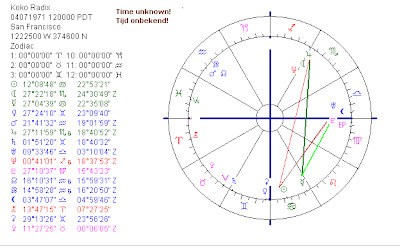 I have studied the charts of animals before (and published about it on my Dutch blog) and I found it surprising...For example.
What to expect of the chart of a gorilla nicknamed 'the Einstein gorilla', a gorilla that understands 2000 words and uses 1000 signs to communicate? Koko, the gorilla, has an IC between 70 and 95! So I would have expected what I found.

MERCURY-JUPITER-PLUTO: GREAT VERBAL POWER
Mercury on July 4, 1971, birthday of Koko is trine Jupter and sextile Pluto (see chart). Mercury-Jupiter-Pluto is the combination of succesful communications! And Just as tight as these aspects are, are the next: Sun sesquisquare Jupiter and quindecile (75d) Pluto for succes in life (enormous self confidence). It must have been the perfect day for a communicator to be born. But..

MARS
It also was a day with a 'calling' Mars, without Ptolomeic aspects in sign and orb 5degree, to call the sportsmen and enterpreneurs. With Mars biquintile Pluto you might think of a creative way to realiser the drive to win or dominate. So the VIP's of that day are men only:
- born in Sydney: Ned Zelic (football player),
- Andy Creeggan (baseball player in Canada),
- Brendan Donnelly (baseball player in the USA) and
- Andrew Murray, English entrepeneur.

The theme of the calling Mars biquintile Pluto is the creative use and abuse of influence, power, money or force. It did not miss it's effect in the life of Koko.
Koko was involved in sexual harassment lawsuits. Former female employees claimed that they were pressured into showing their breasts to Koko by Dr. Patterson. Koko grabs both male and female nipples without warning or provocation!
Geplaatst door Astromarkt op 4:14 PM