Matt Brown, an Australian Minister had a parlimentary party and danced in his underwear on a couch, drunk. That seems to be enough to lose a job.
A newspaper found out and published it. Brown denied inappropiate behaviour towards a female worker at the office, but agreed that he made a mistake. The Australian mentions that Prime Minister Rees forced Brown to step back. It seems that Brown did not tell the truth immediately, and that Rees started making phone calls with those who attented to the specific party. And: what were the transits? 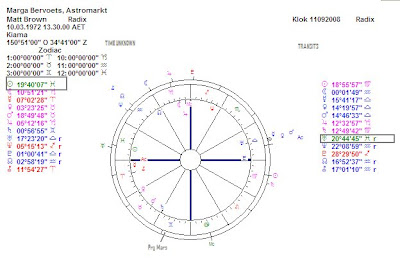 Transit Uranus is conjunct Sun. Uranus' transits often involve 'being in the news'...There are also transits with the progressed chart: Transit Jupiter inconjunct P Mars and Transit Saturn square P Mars. Saturn is the symbol of endings and an inconjunction points at a loss.

NATAL CHART
Look at the chart of March 10, 1972 (when he was born). Mars is inconjunct Uranus and sextile Sun. A perfect combination for acts on impulse. Afflictions of Mars with Uranus and Venus with Neptune (he has an inconjunction) are specific in the charts of males who have more than 1 serious relationship.

Matt Brown is only 36 years old. He is rather young to end his carreer for good this way. With the Moon in Capricorn for ambitions, rising before the Sun, he will probably be back soon, somewhere. Pluto is tightly trine Saturn and that is the combination for the die hard in politics.

Seen in the light of my prior post (about Saturn and Neptune) I find it interesting that Matt Brown has Sun quintile Saturn and quindecile (105 d) Neptune with Sun sextile Mars, however. Does this indicate losing control (Saturn-Neptune) at work (Mars)or giving up a job?