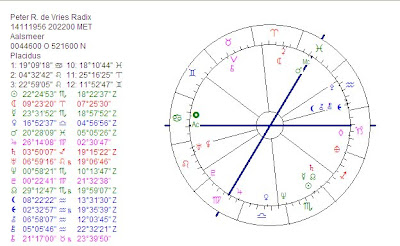 The Emmy Award received by Peter R. de Vries, the Dutch crime reporter (Case of Natalee Holloway), yesterday, shows the importance of transits over progression. These are the transits over the natal positions:

And where was the award? Here it was...

The transit of Neptune square natal Sun refers to the negative publications in the Netherlands about the way the documentary was made and about the (little) effect it had. No arrests have been made since and there is still no vital evidence against Joran van der Sloot. The body of Natalee Holloway remains missing. Because of retro gradation of the planets the same combination as in February is active now, now that he is being rewarded for the documentary that he released in February 2008. At the time he was invited to come to the USA and his documentary was shown on American television. As he said yesterday: 'They seem to appreciate this in the USA'.

There is more about the case of the missing American girl and suspect Van der Sloot in the post about missing people. I wrote:

"Another case of missing persons is that of Natalee Holloway. She vanished after a wild night in the Caribbean. Suspect is Joran van der Sloot, but there is no body to proof that Natalee is death, even. I mentioned in the article about sharing aspects this:

"He is born August 6, 1987, Willemstad. She is born 21-10-1986 Birmingham USA. He was the last person who saw her alive, it seems. As he suspected his and her faith are connected and so are their charts. Apart from the fact that his Mars squares her Pluto and Venus (...) they share:
- Sun conjunct Mars (he) and Sun square Mars (she)
- Sun square Pluto (he) and Sun conjunct Pluto (she)
- Both have Mercury conjunct Venus
- He has Jupiter sesquisquare Saturn, she has the square"

When she disappeared Natalee had transit Mars semi square Mars and sesquisquare Pluto, activating the dangerous Mars-Pluto connection in her natal chart. Joran had Pluto conjunct Uranus that day and sesquisquare Venus. He also had Mars sesquisquare Pluto. So coincidentally they had the same sort of transit on the same day, added with the aspects they already shared. Joran van der Sloot remains a suspect and was recently arrested for the second time, without any results. On December 8, 2007 they released him for the second time." 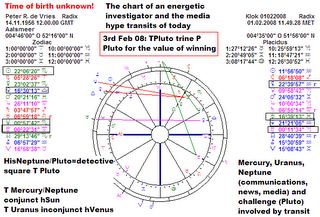 *)For those who are not familiar with the interpretation of planets and their transits: Jupiter is almost similar to success. And to 'travelling and international'. Jupiter seems to perfectly express the USA Emmy Award for the Dutch crime reporter. The investigations that he does on television (the public eye) are nicely symbolized by Neptune/Pluto opposition Aries Point, Neptune dispositor of the Midheaven in Scorpio ruled by Pluto.