On India Divine I found an HOB for David Blain, the illusionist and/or stuntman who has just completed a period of hanging upside down for 60 hours (only interrupted for food, toilet and medical check).
When you consider what he does, it is mostly: impressing the people, stunning them, confusing them in acts and putting his body at risk. It is not supposed to be good for your health to hang upside down, to stay in the water until your skin starts dropping off or to have an icy stay in a cocoon for days. He started as a magician, but now he is performing with his life at risk. He must have an amazing good health. He is different from other magicians or illusionist. His business (Capricorn MC) is to make a living with EXCITEMENT (prominent Uranus square MC) and the amorphous (Neptune, symbol of mysteries). I will explain more about the chart and in a second post I will do a reading from the start to show you how every way leads to controversial adventures.

SUCCESSFUL SELF PROMOTER IN AN AMORPHOUS WORLD
The birth chart of David Blain tells us that he is a self promoting person full of enterprise who needs to get material security. The tightest aspect combination in his chart is with Mars-Jupiter-Neptune, referring to doing a successful job in the world of fantasies and illusions (including religion, movies and chemical industries) and to being happy in spite of wasted energies and infections. In my Dutch book 'AstroTrio' I name two popes as an example of this combination. Popes and actors have in common that they have an audience with vision, fantasy or beliefs. Note that part of the Mars-Jupiter-Neptune combination is on top of his chart! He is above all a man with a lot of energy.

AMAZING!
David Blain is as amazing and exciting as Harry Houdini was in his days. Houdini had Uranus on the descendant. In the chart of Blain, Uranus is 'calling'(not making aspects in sign or orb 5 degrees) and square his MC. Uranus is the symbol of excitement and surprises. So it does not surprise astrologers that he needs to amaze the public and to be different from the rest.

BEING INVENTIVE
Jupiter is on top, with Mars in Aquarius (for technical inventiveness!). Mars is 105 degrees away from Uranus (again the techniques!). Mars, Jupiter and Uranus are prominent in this chart for being inventive in a successful way.

MAGIC AND MYSTERIES
Secrets, mysteries and discrete actions are often related to Neptune and Pluto, like in the charts of Robert Houdin (Neptune oriental), Criss Angel (Neptune oriental) and David Copperfield (Neptune and Pluto tightly connected to the Midheaven). Neptune is semi square Midheaven in the chart of David Blain. Neptune is also sextile Jupiter, 15 degrees from the MC. And Neptune is close to the cusp of the eight house (the house of Pluto). Neptune/Pluto is square Mars (ruler of the Sun and Moon, on top with Jupiter).
Pluto impresses with a biquintile with the Ascendant (creative way to be an authority). He combines a profession that takes secrecy and mystery with a creative way to impress others.

TIMELINE AND ...TODAY
In 1999, when he first started to do stunts, he had progressive Sun square Jupiter. Jupiter promisses growth, success and progression. His solar return chart for this year has Sun, Mars and Jupiter angular. Next year, Uranus will be square his solar return ASC, all the way down in the chart. His progressive Sun is going to be inconjunct his prominent Uranus in the year to come and that is another warning. His will to be someone special in his field (Uranus) might be done with a lot of 'but's'.

Today he has transit Saturn inconjunct the natal Sun. Maybe someone can ask him to take better care of himself? How long can this be going on, taking more and more risks, one performance more impressive than the other? In a few years time his progressive Midheaven changed sign. Perhaps that is a good moment to start another kind of business. 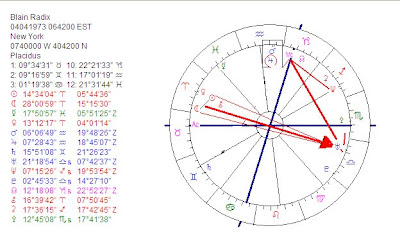 PS about Uranus
When I had Transit Uranus square my natal MC and progressed Ascendant the surprise (and shock) was that there was a mouse in the living room.

Uranus in the shape of a mouse:)

READ ALSO:
Part 1 of the reading of David Blain's chart