ASTROLOGY CHART OF JOSEPHINE BAKER
a life for a musical...

On my Dutch site Astrokrant I posted about the life of Josephine Baker (born June 3, 1906 at about 11 a.m. in Saint Louis). That was because they announced another musical about her. I like to mention some of my findings here. 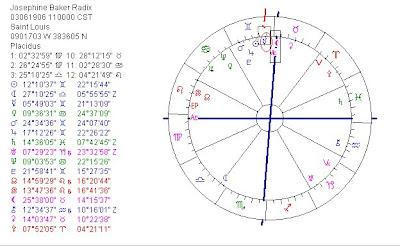 Her Astrological I.D. shows Mercury rising before the Sun (oriental) AND calling (not making aspect in sign and orb 5 degrees), strong in Gemini. Mercury is the symbol of the voice, communicating, messages…And Mercury is on top of her chart!

Of course there is more… 60% of her placements in air signs, 50% in Gemini (that is also a good sign for dancing feet), and 50% in the 10th house of public and career. The planets in the 10th house happen to be a perfect group to symbolize success (Sun, Mercury, Mars, Jupiter and Pluto).

VOCATIONAL ROUTING
Venus disposes of the MC and is tightly conjunct Neptune. Venus is in a wider opposition with Uranus. There is a mutual reception of Venus and Moon (means: they are in each others’ sign). This all is very symbolic for sense of arts and singing. In a study about singers on my site Astromarkt (in Dutch) you can see how many singers have Venus related to Uranus and/or Neptune. If you like to translate it: here is the link.

The combination of all this above makes it hard to NOT see the singer in this chart. Notice that Uranus is in a midpoint Yod (opposition) Venus/Neptune; again the rocking combination for art with rhythm.

MARRIAGES
Josephine Baker was a talented and rich woman who could afford to marry several times and she did. She ended alone. With Venus - Uranus there is always another love and the impulse to get married with the wrong one. Venus-Neptune is romantic and sensitive…The chance for disappointments is evident, also because Neptune disposes of the seventh house of marriage in her chart. Saturn, ruling the 5th house is in the 7th. That makes marriage a case of serious business. And with Saturn square Sun her broken relationships show up as the other side of the blinking gold.

Josephine had many signs of self confidence, progress and growth in her chart. But as a kid she was very poor and it is still not clear if her official father is her natural father. She left school at age 12, with Sun conjunct Mars in the sign of dancing… She must have had a lot of ambition to get as far as she came. In 1925, age 26, she worked in Paris and danced half naked, in a banana skirt. It was in the year that her progressed Sun changed sign that her life style changed completely. From that moment on she got more and more famous.

BTW it is nice to see that in the solar return chart for 1925 in Saint Louis Uranus is on the Ascendant, while in the same chart for Paris Jupiter is on the Descendant.

VOID OF COURSE MOON
I know that it is not done in Astrology land to think of a Void of course moon when analyzing a natal chart. The Void of Course moon belongs to horary chart. It means that the Moon will not make an aspect in sign any more. I happen to have found many VOC-Moons in the charts of childless women. In Josephine Baker’s chart the Moon is also: 'void of course'. The last aspect is the trine with Mars and that was before she was born. A VOC-Moon and a badly afflicted Moon make it hard to have the role of mother and caretaker. In modern times, this does not have to mean being childless involuntarily. But in 1940 it was…In the year that her Ascendant and MC changed sign in progression, Josephine gave birth to a lifeless child. Later she adopted 12 children of different ethnical background. Notice Neptune in the 11th house and Uranus in the 5th for the possibility of adopting children and surgery related to children.

END
She died in coma on April 12, 1975, with Uranus square MC, Venus (progressed ruler 8) inconjunct (!) Ascendant and T Neptune inconjunct progressed Neptune, ruler 8. The MC had recently changed sign. The planets that form the tightest aspect in her chart (Venus and Neptune) are present on her final day. She also had transit Neptune opposition natal Sun and transit Saturn semi square natal MC, Pluto (ruler IC) exactly square Uranus and Venus on the Midheaven for resting in peace.
Had this not been enough, there was also the solar return chart for her last birthday with Mercury (her top planet) and Saturn close together on the descendant, like a good bye, with Pluto on top of the chart. And there was more to see, if you have a good look. But all in all: it meant the end of the life of Josephine Baker. And now there is another musical about her life coming up!