SEPTEMBER 11, ATTA, BUSH AND QUESTIONS LIKE: WAS IT FAKE OR FATE?

In 2006 I wrote a special about the attack on the Twin Towers on the 11th of September 2001. I looked back at the event chart, the chart of the president and the chart of one of the terrorists involved. The article cannot be reproduced on the Internet (on my site Astromarkt)and it should be rewritten anyway. Besides: I read that a majority of USA citizens believe that it was not Atta con suis who did it or Osama bin Laden was not behind it. So: time for a new version.

ATTA: UNREASONABLE RADICAL
Mohammed Atta is said to be the main suspect and the leader of the group of terrorists involved. As it happens, the chart of Mohammed Atta, one of the terrorists, is the chart of a radical and a person you cannot reason with. The chart lacks, for example, placements in air signs and Mercury (important on Aries Point, planet of communications), is also heavily afflicted by the conjunction of Uranus and Pluto. The combination of Mercury, Uranus and Pluto is good for getting radical ideas as you can see in the post about Charlie Sheen and Mel Gibson.
Mars is oriental and ‘calling’ in his chart. This position is common in the charts of persons who are prominently active or aggressive at any –sometimes not controllable - level.
He shares a Sun with the midpoint Mars/Uranus *)with other terrorists and activists. So if someone was making up his I.D., it must have been a good astrologer to choose this birthday for a terrorist.
In the year 2000 he had progressed Sun semi square progressed Neptune (for the frustrating connection with ideology, being isolated and disappointed) and in 2001 his progressed Mars was sesquiquadrate Saturn, a symbol of energy ending (death). 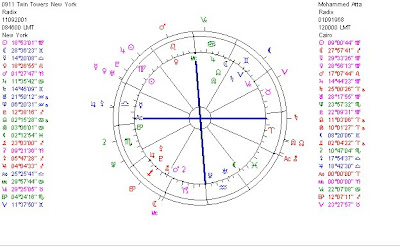 SATURN CONNECTING ATTA AND BUSH
Note that Atta’s Saturn (26th Aries) is conjunct the MC of president George W. Bush (25th Aries). And that his natal Saturn is on the descendant of the very moment of the attack (8:46 , that is when Atta died). Saturn is connecting their charts and most of the time being connected by Saturn is being connected by bad news.

THE SOLAR OF BUSH 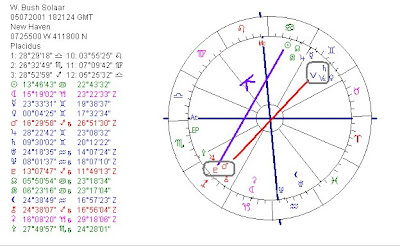 The solar chart of George W. Bush for his 2001 birthday has Mars and Pluto opposition Saturn and Vulcanus in the eight house. It is a combination of danger. Transit Pluto was inconjunct the president’s Sun at the time. Stress and impressive events force him to make changes or change him, involuntarily.
Charts of leaders are very important for the charts of the people of the nation. This transit tells us about a confrontation of life and death with a lot of loss.

THE EVENT CHART (ATTACK)
NEPTUNE AND URANUS FOR DISASTER
Between 8:46 and 10:30 the IC (lowest point in the chart) moves over Neptune and Uranus. Those planets are important in cases of disaster. Neptune is even more important on September 11 than on other days. Neptune does not make major aspects in sign or orb 5 degrees, so that Neptune is ‘calling’. That is an indication for the importance of ideology, mystics and confusion at all possible levels. Neptune is also the planet of medical aid and helpers.

VULCANUS WITH MARS/URANUS, URANUS AND PLUTO ON ASC/MC
I found Vulcanus (the supposed to be planet) exactly sesquisquare Mars/Uranus.
Vulcanus symbolizes terror (public violence) and Mars/Uranus symbolizes the terrorist.
This dangerous midpoint combination lasts all morning and is still active when the last tower falls, at 10:30 a.m. 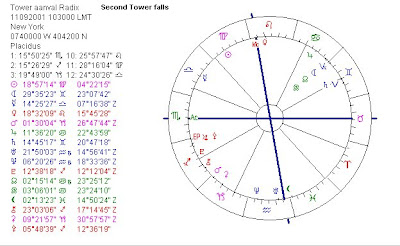 That is the moment when Uranus has traded places with Pluto on the time/place-related midpoint Ascendant/Midheaven. Uranus and Pluto combinations quickly and completely change things, cause revolutions and sometimes: destruction and demolition. It is the combination of force (Pluto) with explosives (Uranus).

GEMINI FOR TWINS
The Moon was in the final (…) degree of Gemini, symbol of the Twin and in the 8th house of transformations when the second tower fell down at 10:30 a.m. Saturn and Vulcanus were also in Gemini.

THE FIRST PLANE
At 8:46 the first plane hits the building in Manhattan. Pluto is then exactly at the midpoint Ascendant/MC. Pluto is the planet of terror and destruction.

SECOND TOWER COLLAPSES
It is 10:30 when the Moon is in the eight house of life and death and Uranus is in aspect with the midpoint of Ascendant and MC. Uranus is always there when something explodes or collides or when something shocks the nation. In the chart of the bomb dropping on Hiroshima Uranus is on top, too. See that chart here.)

FATE?
Every single day Pluto and/or Uranus make aspects to the midpoint of Ascendant and Midheaven and every single day Neptune or Uranus is conjunct the IC or MC at a certain moment and place. Accidents and sad things, earth quakes and disaster happen every day. Most of them could have been prevented.

The Moon is in Gemini only about 2 days in a month. Saturn and Vulcanus are in the 8th house for 2 hours a day. Every month the Moon is conjunct the fixed star Betelgeuse, announcing disaster and calamities. That is during 2 hours.
Less frequent is the aspect that Vulcanus makes with Mars/Uranus, but still this occurs a few times a year.

The chance that all of this will happen within 2 hours is however another chapter…The chart of 0911 is the chart of a horrible and unique disaster that didn’t have to take place at all. The idea did not come from the stars (des astres...).

PS September 18, 2008
*)The Mountain Astrologer mentions that Edward Gillam pointed at the septile connection between Sun-Mars-Uranus-Descendant in the chart of the moment of the first hit at the Towers. Septiles make it easy to connect planets. Mars-Uranus is frequent in the charts of accidents, terrorism and in military actions. That makes the timing even more special than it already was in my astrologer's eyes.
Geplaatst door Astromarkt op 1:08 PM

HE died nine days after his birthday, A fanaticak, radical cookie.