THE SILENCE OF BERNANKE WITH TRANSIT NEPTUNE 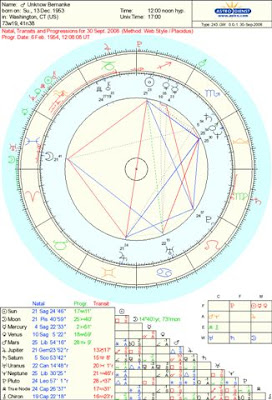 Where is Bernanke and where is the sound of Greenspan in the middle of the financial crisis in the USA (and the world)? Bernanke 'suffers from' transit Uranus square his natal Sun. So maybe he is in shock, too.
Last April he had transit Pluto semisquare his progressed Sun and Saturn opposition progressed Mercury. It would have been fortunate if he had transits of Jupiter coming up, but in fact it is transit Saturn who will be square his natal Sun soon. Will he step back in a few weeks time? Earlier Greenspan (and not Bernanke) warned for a recession*).

Today Bernanke has transit Neptune sextile Sun. In his natal chart he has Sun sextile Neptune. Discretion and silence are related to Neptune and to the position of Bernanke, who keeps a lot of secrets. Staying at the background and keeping quiet, doing what needs to be done, is perhaps the best thing to do when there is a financial crisis and you are the chief financials of the country's bank. The media (Neptune) seems to be soft for Bernanke now. In a Dutch newspaper they name him an expert on fighting this crisis as he studied the economical recession of the 30's.

Hard aspects always seem to hit harder than the soft ones. So it is in this chart. I read an explanation on Bob Mark's site about Uranus transits. He advices not to decide too soon during a transit of Uranus. We might expect a man in his position to have good advisors and to consider and reconsider before he agrees with the suggested solutions. Let's hope Uranus gives flashing insights and not just nerves.

Bernanke made it to the top of the financial world. Only his HOB could tell us if he might fall down right now. But it is certain that Saturn will be like a heavy load pulling him down, within a few weeks time. Saturn is the planet of business and taking responsibilities. That aspect of Saturn might be showing up shortly. Hard times are coming. And there may be little time to waste with a transit of Saturn.

Above you see the positions of his day of birth, the progressions and the transits. Bernanke was born in Augusta on December 13, 1953.